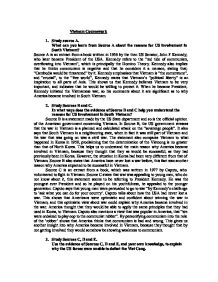 What can you learn from Source A about the reasons for US involvement in South Vietnam?

Vietnam Coursework 1. Study source A. What can you learn from Source A about the reasons for US involvement in South Vietnam? Source A is an extract from a book written in 1956 by the then US Senator, John F Kennedy, who later became President of the USA. Kennedy refers to the "red tide of communism, overflowing into Vietnam", which is principally the Domino Theory. Kennedy also implies that he thinks communism is negative and that he considers it a menace, stating that; "Cambodia would be threatened" by it. Kennedy emphasises that Vietnam is "the cornerstone", and "crucial", to the "free world", Kennedy states that Vietnam's "political liberty" is an inspiration to all parts of Asia. This shows us that Kennedy believes Vietnam to be very important, and indicates that he would be willing to protect it. When he became President, Kennedy initiated the Vietnamese war, so his comments about it are significant as to why America became involved in South Vietnam. 2. Study Sources B and C. In what ways does the evidence of Source B and C help you understand the reasons for US involvement in South Vietnam? Source B is a statement made by the US State department and so is the official opinion of the American government concerning Vietnam. In Source B, the US government stresses that the war in Vietnam is a planned and calculated attack on the "sovereign people". It also says that South Vietnam is a neighbouring state, when in fact it was still part of Vietnam and the war that was going on was a civil war. The statement also compares Vietnam to what happened in Korea in 1950, proclaiming that the determination of the Vietcong is no greater than that of North Korea. This helps us to understand the main reason why America became involved in Vietnam, because they thought that they as would be successful, as they had previously been in Korea. ...read more.

The information in the article is too vague and so it is not very useful as an indication of public opinion. Source G, is a table showing the public view of the most important problems facing the USA. From the years 1965 to 1968, it shows the main problem the people thought was facing the USA was Vietnam. The information in Source G is from a 'Gallup Pole', which is an respected, independent survey and a range of different groups of people are questioned. We do not know how many people were questioned for the pole, but because the information is from a 'Gallup Pole', we know that this source is reliable. However, this source is not that useful, as it is not very detailed about what the people think. The source tells us that from 1965 to 1968 American people recognised Vietnam as an issue, but it does not tell us what particular aspect of Vietnam people thought was important. Source I is an article that describes what happened at My Lai, although My Lai occurred in 1968, this article was published in 1970. Because this article was not available to the public until 1970, this source is not terribly appropriate to this question. However, because the government concealed the events of My Lai, it does indicate that the government was weary of public opinion and reaction to Vietnam. It also shows that they wanted support of the people and that they knew that people were capable of reacting in a negative way. This highlights the fact that the public was not as informed, as they should have been, and so makes public opinion less valuable as evidence. 5. Study Sources G, H, I, J, K and L. Use the evidence of these sources, and your own knowledge, to explain why public opinion about the war in the USA changed between 1967 and 1970. ...read more.

The more facts a reporter could give, the more popular the story would be. This resulted in a much greater informed public. Television made the events in Vietnam seem nearer and more relevant. Previous wars had been removed from the general population and they did not feel a part of it, nor did it affect them in any way. However, now the war was being broadcast straight into their homes, they could do little to keep away from it. Footage from the front line was broadcast repeatedly and this had the effect of drilling events into the public. The war became a part of their lives and they knew exactly what was going on. This must have had an effect on their opinions as to whether what they were seeing should be happening. There are of course other reasons for the changing attitudes but in I think that they were played a less significant role. Magazines and newspapers, had been around during previous wars, and were uncensored for the most part. Therefore, they reflected similar events as television but they also put across various opinions, particularly in cartoons such as the one in Source L. To a lesser extent, radio also informed people of what was happening in Vietnam. There was also the growing pop culture in the US. Protest singers such as Bob Dillan influenced other people's opinions by putting across theirs in such a creative medium. Songs such as the one in Source K effectively put across their opinions in a poignant manner that made people stop and think about whether the war was right or not. In conclusion, I would say that there were definitely other reasons for the change in the public's attitudes to the war but I think that television was the most important. Television allowed the public to actually see what was happening right at the front line. I think television raised public awareness enormously and provided the public with hard, uncensored facts, facts that had never been open to the public, in previous wars. ...read more.