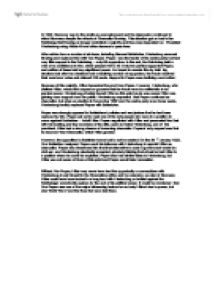 What effect did Von Papen have on Hitlers' rise to power?

In 1932, Germany was in dire straits as unemployment and the depression continued to affect Germany despite the effects of Chancellor Bruning. This situation got so bad in the Reichstag that Bruning no longer controlled a majority and thus was dependant on President Hindenburg using Article 48 and other decrees to pass laws. After advice from a number of advisors, including General Schleicher, Hindenburg removed Bruning and replaced him with Von Papen. Papen was the leader of the centre party but had very little support in the Reichstag - only 68 supporters. In the end, the Reichstag held a vote of no confidence in him, which passed 512 to 42. ...read more.

Hindenburg privately feared Hitler as this point as he was aware Hitler was gaining more support from the public. Hindenburg requested that Papen continued as chancellor, but when an election in November 1952 won the centre party even fewer seats, Hindenburg forcibly replaced Papen with Schleicher. Papen was strongly opposed to Schleichers' policies and was jealous that he had been replaced by him. Papen set out to meet one of the only people who were in a position to move against Schleicher - Adolf Hitler. Papen negotiated with Hitler and persuaded him that with his backing and key members of the elite, such as Oskar Hindenburg, son of the president, Hitler had a strong chance of becoming chancellor. ...read more.

Papen also had similar ideas to Hindenburg, but Hitler was not aware of them at this point and Papen would later reconsider. Without Von Papen, Hitler may never have had the opportunity or connections with Hindenburg to put himself in the Chancellors office and by extension, as ruler of Germany. Hitler could have been locked in a long feud with Hindenburg or battled against the Reichstags' unworkable system for the rest of his political career. It could be concluded that Von Papen was one of the major influencing factors for not only Hitlers' rise to power, but also World War 2 and the lives that were lost there. ?? ?? ?? ?? ...read more.