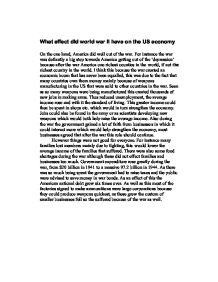 What effect did world war II have on the US economy

What effect did world war II have on the US economy On the one hand, America did well out of the war. For instance the war was defiantly a big step towards America getting out of the 'depression' because after the war America one richest counties in the world, if not the richest country in the world. I think this because the war created an economic boom that has never been equalled, this was due to the fact that many countries own them money mainly because of weapons manufacturing in the US that were sold to other countries in the war. ...read more.

Thus reduced unemployment, the average income rose and with it the standard of living. This greater income could then be spent in shops etc. which would in turn strengthen the economy. Jobs could also be found in the army or as scientists developing new weapons which would both help raise the average income. Also during the war the government gained a lot of faith from businesses in which it could interact more which would help strengthen the economy, most businesses agreed that after the war this role should continue. ...read more.

Government expenditure rose greatly during the war, from $20 billion in 1941 to a massive 97.2 billion in 1944. As there was so much being spent the government had to raise taxes and the public were advised to save money in war bonds. As an effect of this the American national debt grew six times over. As well as this most of the factories signed to make ammunitions were large corporations because they could produce weapons quickest, as these grew the custom of smaller businesses fell so the suffered because of the war as well. ...read more.