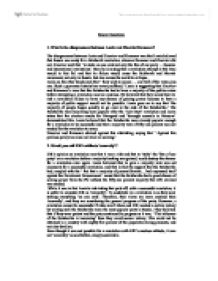 What is the disagreement between Lenin and Zinoviev/Kamenev? - Source based questions.

Source Questions 1. What is the disagreement between Lenin and Zinoviev/Kamenev? The disagreement between Lenin and Zinoviev and Kamenev was that Lenin believed that Russia was ready for a Bolshevik revolution, whereas Kamenev and Zinoviev did not. Zinoviev said that ' to stake on one card not only the fate of our party ... Russian and international revolutions.' Here he is saying that a revolution attempt at this time would in fact fail and that its failure would cause the Bolshevik and Marxist movement, not only in Russia, but also across the world to collapse. Lenin on the other hands says that ' they wish to secure ... one half of the votes plus one. Such a guarantee history has never proffered,' Lenin is suggesting that Zinoviev and Kamenev's view that the Bolsheviks had to have a majority of the publics votes before attempting a revolution was too cautious. He believed that they would have to risk a revolution failure to have any chance of gaining power because to have a majority of public support would not be possible. Lenin goes on to say that 'the majority of people began quickly to go over to the side of the Bolsheviks.' ...read more.

While it was in fact Lenin's risk-taking that paid off, with a successful revolution, it is unfair to consider Z/K as 'cowardly'. To undertake in a revolution is as they said, staking everything 'on one card'. Therefore, their views are more cautious than 'cowardly', and they are considering the general progress of the party. However, a revolution cannot be successful if risks aren't taken and Z/K wanted a certain victory by waiting until the Bolsheviks were the most popular party in Russia. They believed that if they were patient and the party continued to progress as it was, ' The influence of the Bolsheviks is increasing' then they could secure victory. This could not be obtained in a country with eighty-five percent of the population being peasants, and not city-dwellers. Even though it was not possible for a revolution with Z/K's cautious attitude, it was not 'cowardly' as said before, simply unrealistic. 3. Explain carefully whether the city election results support: a) Just Lenin's argument b) Just Zinoviev and Kaminev's argument c) Both arguments The results for the Petrograd August 20th elections and the Moscow elections in 1917 supports both Lenin's and Z/K's arguments. ...read more.

Lenin's argument that the Bolsheviks already had enough popularity to seize power from the PG is also supported by the city election results, because the city election results from both Petrograd and Moscow show that the Bolsheviks popularity was increasing. 4. Why is Lenin reluctant to accept the verdict of the ballot box? Do you think his argument is satisfactory? Lenin claims that he will not accept the election results of January 1918 because the elections were 'conducted under the bourgeois yoke,' Lenin is suggesting that the elections were not entirely democratic and that the system was suited more to the bourgeoisie. However this is not a particularly satisfactory argument because the Social Revolutionaries won the elections, not a bourgeois party, but a peasant party. Lenin then goes on to justify closing down the elections because 'the proletariat must first overthrow the bourgeoisie and conquer the power of the state, i.e. the dictatorship of the proletariat' this was the belief of Karl Marx, whom Lenin borrowed his Bolshevik ideology from. Therefore this argument is a justified one from a Marxist point of view. If social justice is the prime criteria, then Lenin's argument is not satisfactory. However if a Marxist revolution is the primary goal, then this argument could be seen as satisfactory. ...read more.