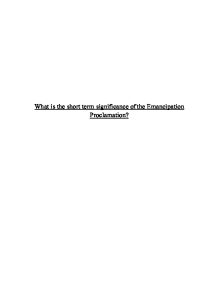 What is the short term significance of the Emancipation Proclamation?

What is the short term significance of the Emancipation Proclamation? The Emancipation Declaration was announced by Abraham Lincoln in 1863, it assured the abolishment of slavery, and this alone was a short term significance revealing the importance of Abraham Lincoln's decision. For the purpose of this discussion the meaning of short term significance will be defined as a pivotal moment of the period 1863-1865 in the American Civil war. To measure these criteria we must consider the short term significance of the main areas in this period the primary areas will be the lives of black Americans, black soldiers and white officers in the Union Army, Abraham Lincoln's decision on the Emancipation Proclamation and foreign affairs In 1863 Abraham Lincoln fulfilled his promise, the emancipation Proclamation: "that all persons held as slaves" within the states still in rebellion "are henceforward shall be, free ". This proves the support of an ideal politician promoting the freedom of black American slaves. In the short term period this reinforced the fundamental transformation of the war, as after the proclamation slavery was untouched. Therefore the war for the union became a war against slavery, both borders battling for Black slaves. This illustrates the desperation of people that how significant Black Salves have become to both North and South. ...read more.

It could be argued that it was a measured progress. Following a letter by John A. Andrew 10 that also suggests the gradual acceptance of Black American in the army. This provided support for their freedom and emphasised their right to be equal. The short term significance for this proves that the emancipation proclamation promoted assurance and willingness that the white politicians were starting to give for black American soldiers. In contrast it could be argued that the emancipation proclamation was brought in as a war measure it was not designed to free slaves and promote equality but to assist the restoration of the union, and that black American men were used for their physical capability in the war not to make them equal and freed. In another extract from 'Free at last 1992'11 it stated 'African descent were physiologically adapted to tropical climates and peculiarly suited to duty in unhealthy settings' this illustrates that in their opinion black American are physically stronger and more suited for harsh duties in the army, therefore in the short term significance this can be seen as an excuse that the emancipation proclamation did not necessary support black equality in actuality it made black soldiers work under the commands of white officers, perhaps another form of slavery; a continuation. ...read more.

1 Free at last documentary 1992- this specific extract talks about the reaction of slaves after the Emancipation Proclamation 2 A white officer in the confederate army giving his statement 3 A statement made in 1863 - about slaves being morally strengthened religiously 4 People who are preaching the words of god 5 A former Black American slave talking about his experience of being tortured when trying to escape. 6 This extract refers to the change of the purpose of the war, that the military north is changing their view on the Emancipation Proclamation. 7 This specific extract refers to the transformation of black American participating in the Union Army. 8 This specific extract refers the opinion of the white American governor of involving black American the union Army. 9 This particular extract was from the governor of Massachusetts, giving assurance that black soldiers will be treated equally. 10 Governor of Massachusetts 11 In this particular extract it refers back to the physical capability of Black Americans. 12 A former slave giving his opinion on Lincoln's decisions and great deeds. 13 'Life and times', Fredrick Douglass - described his reaction to the Emancipation Proclamation. 14 By A.J Farme 1996- describing Lincolns Actions. 15 By William Genapp 2002 16 Rouge-et-noir, Volume 43 p161 1862 - Abe Lincoln's last card ?? ?? ?? ?? ...read more.