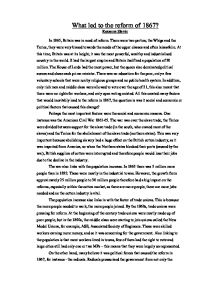 What led to the reform of 1867? Roxanne Slevin In 1865, Britain was in need of reform. There were two parties; the Whigs and the Tories, they were very biased towards the needs of the upper classes and often laisse-faire. At this time, Britain was at its height; it was the most powerful, wealthy and industrialised country in the world. It had the largest empire and Britain itself had a population of 30 million. The House of Lords had the most power, but the queen also dominated political scenes and chose each prime minister. There was no education for the poor, only a few voluntary schools that were run by religious groups and no public health system. In addition, only rich men and middle class were allowed to vote over the age of 21, this also meant that there were no rights for workers, and only open voting existed. All this created many factors that would inevitably lead to the reform in 1867, the question is was it social and economic or political factors that caused this change? ...read more.

These were skilled workers earning more money, and so it was concerning for the government. Also linking to the population is that most workers lived in towns, few of them had the right to vote and large cities still had only one or two MPs - this means that they were largely un-represented. On the other hand, many believe it was political forces that caused the reform in 1867, for instance - the radicals. Radicals pressurised the government from not only the outside but the inside to. John Bright was an MP of Birmingham who travelled across the country to find men who will stand up for their rights. It was not unusual for over 100,000 men to turn up to a demonstration. John Bright said in a speech, "Palaces, Baronial castles, great cause, stately mansions do not make up the nation, the nation in every country dwells in a cottage," 1858. Bright put forward many convincing arguments to the government. It could be suggested that this then led to Gillseppe Garibaldi. ...read more.

With hindsight, it is possible to see how these factors forced the government to change due to the impact in had on the majority of the nation. Many would have died of starvation due to the civil war, especially with the population increasing rapidly, and the cotton industry declining. This desperation was demonstrated in trade unions, as even the middle class started to join them. It is possible that without these factors that the government would not have had the politicians, such as Disraeli and Gladstone, implementing these reforms into the British legal system. People would not have been creating Radical groups and there would have been no need for Garibaldi to influence people. It is suggested that whomever was in power at the time, that they would have changed do to the fear of a revolution, and because the prime minister, Lord Palmerston, died in 1865, who was persistently hostile to any electoral reforms. It was therefore up to the new government to introduce these changes, hence the Reform Act of 1867. ...read more.