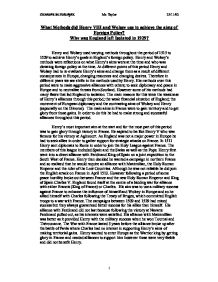 What Methods did Henry VIII and Wolsey use to achieve the aims of Foreign Policy?

What Methods did Henry VIII and Wolsey use to achieve the aims of Foreign Policy? Why was England left Isolated in 1929? Henry and Wolsey used varying methods throughout the period of 1515 to 1529 to achieve Henry's goals in England's foreign policy. Henry and Wolsey's methods were reflections on what Henry's aims were at the time and who was dictating foreign policy at the time. At different points of this period Henry and Wolsey had to re-evaluate Henry's aims and change them as a result of different consequences in Europe, changing resources and changing desires. Therefore in different years we see shifts in the methods used by Henry. His methods over this period were to make aggressive alliances with others; to seek diplomacy and peace in Europe and to neutralize threats from Scotland. However some of his methods had many flaws that led England to isolation. The main reasons for this were the weakness of Henry's alliances through this period; the weak financial situation of England; the movement of European diplomacy and the contrasting aims of Wolsey and Henry (especially on the Divorce). The main aims in France were to gain territory and to get glory from those gains. In order to do this he had to make strong and successful alliances throughout this period. Henry's most important aim at the start and for the most part of this period was to gain glory through victory in France. He aspired to be like Henry V who was famous for his victory at Agincourt. As England was not a major power in Europe he had to seek allies in order to gather support for strategic attacks on France. In 1511 Henry sent diplomats to Rome in order to join the Holy League against France. The members of this league included Spain and the Swiss as well as the Pope. Henry first went into a direct alliance with Ferdinand King of Spain on a joint expedition to the South West of France. ...read more.

One of the other big problems, which Henry had no control over was the significant changes to European politics that total changed the political relations between the nations. The changes in political power led to the shift of importance from Northern France, to the Northern Italy which left England isolated geologically as well as politically. The main turning point was the death of Ferdinand and Maximilian, which led to Charles having all the titles bestowed upon him in 1519 and becoming both the King of Spain and the Emperor of the Holy Roman Empire. Previously there were a few powerful countries with France having the largest share of power and money but after this Charles V became the strongest leader in Europe. This led to the complete breakdown of the Treaty of London. The introduction of a superpower into European politics led to a disillusion of the leaders that a peace would work. The dynastic rivalry between Francis and Charles escalated, as they were the main leaders in Europe. This made England the most important ally as it was through the English Channel that England could help or hinder Charles if it wished to. Therefore England had to make the transition from a position where they had proven success as the diplomats of Europe to a position where they had not had the best success - in alliances. He then allied himself with Charles but the with the alliance collapsing things suddenly changed following Charles's success at Pavia in Italy. This success was another turning point as it opened a new route to the Holy Roman Empire through northern Italy for Charles. Therefore the route through the channel was not needed and securing the route through the problematic Northern Italian cities. The centre of Europe had once again shifted back to northern Italy an area where Henry had no influence or power over. Therefore when the Treaty of Cognac was signed, although it was sponsored by England, it did not sign because it was ...read more.

However England could not make peace with Charles because he needed the annulment and so required could not have an agreement with Charles, as he would not support them. Wolsey was not allowed to go to Cambrai where he hoped to prevent certain isolation by making an alliance because Henry wanted him to focus on his divorce rather than in negotiations. He could not negotiate between Francis and Charles because England was no longer neutral to both sides and because the policy of Henry was too narrow to give any room for political manoeuvring. Therefore they became isolated from Europe by not having any more allies and because now that Henry was in full control, the focus was not what was best for England in Europe but what Henry needed i.e. a divorce which therefore limited Wolsey's options to the extent that England found itself isolated under the League of Cambrai, which involved all the major powers except him in 1511, and by 1529 he found himself in the same position under the Peace of Cambrai. England's methods were practical but slightly na�ve and had mixed results for Henry and Wolsey. England's strongest and most successful method was to use diplomacy and peace negotiations and to have Henry as the arbiter of Europe. Unfortunately some of Henry's methods were reason for the overall failure of his foreign policy in this period as well as other factors such as the changing political scene in Europe and Henry's desire for a divorce. Therefore by the end of 1929 England found itself isolated from Europe for many reasons, which came down to England having no allies or money for war; Henry taking charge in response to his desire for a divorce; the strength of Charles V and the shift of the focus of Europe. Once Charles became Holy Roman Emperor, it was possible for England to become isolated from Europe but it was able to stay at the centre through Wolsey's diplomacy but once Henry took charge it could not last any longer at the centre pf European politics. CHITRAN SELVARAJAH Mr. Taylor 23/11/02 1 ...read more.