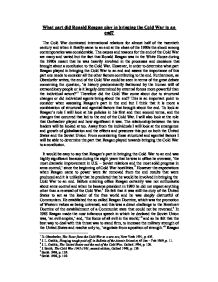 What part did Ronald Reagan play in bringing the Cold War to an end?

What part did Ronald Reagan play in bringing the Cold War to an end? The Cold War dominated international relations for almost half of the twentieth century and when it finally came to an end at the close of the 1980s the shock among contemporaries was considerable. The causes and reasons for the end of the Cold War are many and varied but the fact that Ronald Reagan was in the White House during the 1980s meant that he was heavily involved in the processes and decisions that brought about a conclusion to the Cold War. However, in order to determine what part Reagan played in bringing the Cold War to an end and assess the importance of this part one needs to consider all the other factors contributing to the end. Furthermore, as Oberdorfer writes, the end of the Cold War could be seen in terms of the great debate concerning the question, 'is history predominantly fashioned by the human will of extraordinary people or is it largely determined by external forces more powerful than the individual actors?'1 Therefore did the Cold War come about due to structural changes or did individual agents bring about the end? This is an important point to consider when assessing Reagan's part in the end but I think that it is more a combination of structural and agential factors that brought about the end. To look at Reagan's role I will look at his policies in his first and then second terms, and the changes that occurred that led to the end of the Cold War. ...read more.

the Soviet Union was, 'at a peak in its fortunes,' and the United States at a trough in its fortunes.19 In the early 1980s the Soviet Union was in decline with a stalemate in Afghanistan, internal problems in Poland with the emergence of Solidarity and such like, ineffectiveness when dealing with the Middle East, stagnation in the economy, and it had become too entangled in the problems of the Third World.20 Along with these problems the Soviet leadership was very weak with the consecutive deaths of Brezhnev, Andropov and Chernenko all in relatively short period while at the same time strong western leaders were in place in the form of Reagan, Thatcher, Mitterand and Kohl. Consequently attempts at diplomacy and talks on arms reductions did not get very far, and it was not until 1985 that the right combination of, 'a politically strong United States' president and a physically strong Soviet general secretary,' were in office simultaneously to enable the Cold War to move forward.21 Therefore conditions were right for a move towards greater arms control and an improvement in American - Soviet relations. It was Gorbachev who took the initiative because he had to do something in order to get the Soviet Union out of the downward spiral that it was in. On becoming general secretary Gorbachev's main aim was to stabilise and expand the ailing Soviet economy in order to try to maintain the Soviet Union's status as a superpower, and he announced his policy Perestroika, which was meant to restructure the economy.22 To this objective of economic reform all his other policies and actions were linked. ...read more.

Gorbachev was aware of this and he did not resist the cries for independence and freedom that were echoing from Eastern Europe partly in the hope that the world would see the Soviet Union as becoming more tolerant and democratic. However these changes in global structures were underlying trends and the Soviet Foreign Minister Bessmertnykh said that the improvement in relations between the United States and the Soviet Union was, 'a rare case in history when a major change did not just develop - it was willed to happen.'36 It was Reagan and Gorbachev that acknowledged the change in global trends and structures and then went about trying to use those changes to bring the Cold War to an end. By the time George Bush Snr. was sworn in as president in January 1989 it appeared that the prospect of an actual nuclear holocaust was more remote than at any other time since the beginning of the Cold War rivalry of the superpowers.37 Later that same year the Berlin Wall was torn down and just two years after that the whole of the Soviet Union collapsed. Ronald Reagan played a key role in contributing to these events with his early military expansion putting further pressure on an already strained Soviet economy. Then, when the time was right, Reagan made great progress, along with Gorbachev, on arms reductions and improving American-Soviet relations to enable them to bring about an end to a confrontation that was no longer benefiting either side in an ever increasing globalised world. Therefore the issue that George Bush had to deal with in 1989 was not how he should fight the Cold War but instead decide whether the Cold War was over. ...read more.