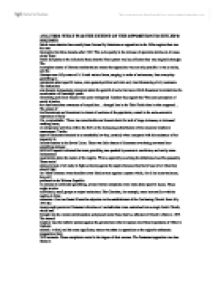 WHAT WAS THE EXTENT OF THE OPPOSITION TO HITLER'S REGIME?

ANALYSIS: WHAT WAS THE EXTENT OF THE OPPOSITION TO HITLER'S REGIME? Much more attention has recently been focused by historians on opposition to the Hitler regime than was the case during the first three decades after 1945. This is due partly to the increase of specialist studies on all areas of the Third Reich and partly to the influential thesis that the n**i system was less efficient than was originally thought. The incomplete nature of German totalitarianism meant that opposition was not only possible: it was a reality, and the Gestapo were fully aware of it. It took various forms, ranging, in order of seriousness, from every-day grumbling to complaints about specific issues, more general political activism and, most threatening of all, resistance. The authorities also became increasingly concerned about the growth of social deviance which threatened to undermine the re-education of Germany's youth. Grumbling and minor dissent were quite widespread. Kershaw has argued that 'The acute perception of social injustice, the class-conscious awareness of inequalities ... changed less in the Third Reich than is often supposed ... The extent of disillusionment and discontent in almost all sections of the population, rooted in the socio-economic experience of daily life, is remarkable.` There was considerable oral dissent about the lack of wage increases, or increased working hours, or compulsory activities within the KdF, or the increasing subordination of the consumer market to rearmament. Yet the type of discontent remained at a remarkably low key, certainly when compared with the resistance of the peasantry to collectivisation in the Soviet Union. ...read more.

The SPD, meanwhile, had been less directly involved in political activism. From its position in exile, SOPADE was organised by Ernst Schumacher, initially from Prague, then from Paris. They were generally more restrained and cautious than the KPD in their actions. They had the advantage of more accurate information on the state of support shown for the regime in the SOPADE reports. By and large neither they nor the Communists succeeded in making any major inroads into the working classes. As we have already seen, there was plenty of grumbling but little chance of persuading workers to risk their livelihood, families and lives in the expression of political opposition. There were, however, small groups who were prepared to make such a sacrifice. The strongest form of opposition took the form of resistance, an attempt to remove the regime altogether. Realistically this could be done only by a coup since all the constitutional channels had been blocked by Hitler's so-called 'legal revolution' between 1933 and 1934. The key to any chance of success was the army. This had, however, been won over by the process of gradual nazification during the 1930s. Hence the only possibility was the defection of disillusioned elements and their linking up with individuals and groups prepared to risk everything on a political substitution. The army elements were always there. Ironically, they were nearly always members of the Prussian aristocracy, deeply conservative in their outlook and, in some instances, former enemies of the Weimar Republic. ...read more.

In all cases the authorities were seriously concerned - but frequently did not know what to do - apart from the occasional salutary public hanging of Edelweiss Pirates. At the same time, the activities of the Edelweiss Pirates and Swing Movements lacked the organisational edge to be anything more than an embarrassment to the regime. Social deviance was, therefore, never likely to amount to serious political opposition. The overall deduction which can be drawn from these different strands is a complex one. In theory, the n**i State was totalitarian in that it eradicated institutions allowing for the formal expression of dissent and opposition and then proceeded to use the SS and Gestapo to pick off individual manifestations of anti-n**i behaviour. By and large this combined process was successful: there was, after all, never any real threat to the regime except for the occasional act of violence. And yet the fact that opposition did develop in such a variety of forms indicates that totalitarianism was only partly successful: perhaps this can be quantified as considerably more so than in Mussolini's Italy but somewhat less so than in Stalin's Russia. The regime frequently had to make concessions on specific is sues; it faced a general increase in deviant behaviour; and, during the war, it provoked the coalescence of normally incompatible groups. It is possible to go further. Peukert argues that the Volksgemeinschaft had not been achieved by 1939 and that the internal harmony of the system needed increasingly to be maintained by diverting public opinion against minority groups whether inside or outside Germany. 'Terror accordingly bit ever deeper ... from the margins of society into its heart. ...read more.