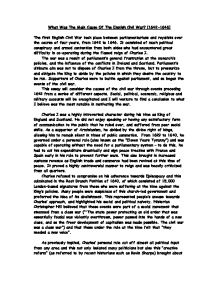 What Was The Main Cause Of The First English Civil War?

What Was The Main Cause Of The English Civil War? [1642-1646] The first English Civil War took place between parliamentarians and royalists over the course of four years, from 1642 to 1646. It consisted of much political conspiracy and armed contention from both sides who had encountered great difficulty in co-operating during the flawed reign of Charles I. The war was a result of parliament's general frustration at the monarch's policies, and the influence of the conflicts in Ireland and Scotland. Parliament's ultimate aim was not to dispose of Charles I from the throne, but to pressurize and obligate the King to abide by the policies in which they desire the country to be run. Supporters of Charles were to battle against parliament, and so began the events of the civil war. This essay will consider the causes of the civil war through events preceding 1642 from a series of different aspects. Social, political, economic, religious and military accounts will be excogitated and I will venture to find a conclusion to what I believe was the most notable in motivating the war. Charles I was a highly introverted character during his time as King of England and Scotland. He did not enjoy speaking or having any satisfactory form of communication to the public that he ruled over, and suffered from poor social skills. As a supporter of Arminianism, he abided by the divine right of kings, allowing him to remain silent in times of public commotion. ...read more.

People with property within limits of the boundaries of the Royal forests during Edward I's reign were fined for encroachment, and the Court of Wards was exploited so that the King became an acting guardian to the children of rich parents who had passed away, profiting by selling the estates that those children would have acquired through inheritance. Also during the Personal Rule, Charles' foreign policy revolved around isolating England from any non-domestic conflict. This, of course, compensated for the lack of funds - as did the avoidance of any major innovations in the country's communities. People were upset with the lack of advances at the time and this represents another reason as to why many people felt disgruntled under Charles' reign. Another factor that enraged the public was Charles' lifestyle and expensive taste. He held a firm interest in art and culture and purchased many paintings and portraits from established artists, such as Raphael and Titian (his collection of art was later dispersed by Oliver Cromwell). They felt that because they had limited resources on which to survive at this time, it was unfair of the King to spend abnormally high amounts of money on products that he could have easily survived without. Charles' lifestyle was reflected in his religious practice. Whereas Protestants favoured a plainer approach towards worship and their churches, the King was far more elaborate in these issues, enjoying a high Anglican form of worship which was deeply ritualistic and extensively decorated. ...read more.

to work around as the dissolution of Parliament was a central issue, and the lack of funds meant the King had to increase revenue by introducing taxes, such as the notorious ship money - an economic decision which enraged the public, as did many others. On a par with the importance of these social and economic expressions were that of military events, and the restriction of the power to control armies by Parliament, and the Irish Rebellion. However, I believe that religious issues were of a much more important nature. It is evident that there was a massive divide in the beliefs of the country, and as people are passionate about their beliefs, they will stand up to what they see as true and would be enraged if their reckonings were to be challenged, let alone deal with the abrupt imposition of something completely different (the enforcement of the Common Book of Prayer in Scotland, c. 1637). In conclusion, and in spite of the importance of religion during these times, my opinion is that the political causes outweigh all else, in particular the intrusions on Charles' policies by the John Pym-led Long Parliament in 1641. The Grand Remonstrance was a direct attack on the King, as were a series of other statements issued - and, as a monarch, Charles' only option was to enter into war to quell the threat that Parliament pressured, as life alongside it had become intolerable while having the majority of his power limited considerably and his reputation tarnished. ...read more.