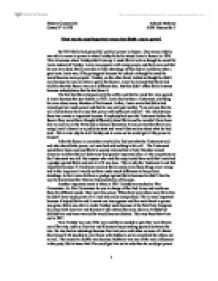 What was the most important reason that Stalin rose to power?

What was the most important reason that Stalin rose to power? By 1927 Stalin had gained full political power in Russia. One reason why he was able to come to power is when Trotsky failed to attend Lenin's funeral in 1924. This is because when Trotsky didn't turn up it made Stalin look as though he cared for Lenin instead of Trotsky. Lenin was popular with many people and they were sad that he was now dead. Stalin was able to take advantage of this and tell everyone what a great man Lenin was. If he got support because he looked as though he cared he would become more popular. Trotsky, on the other hand, looked as though he didn't care because he was not able to get to the funeral. Later he claimed that Stalin had told him that the funeral was on a different date. But this didn't affect Stalin's status because nobody knew that he had done it. The fact that Stalin helped carry the coffin and that he made the main speech is ironic because the year before in 1923, Lenin had written a Testament, clarifying his view about every Member of Parliament. In this, Lenin wrote that Stalin had already got too much power and that he was not trust worthy, "I am not sure that he will always know how to use that power with sufficient caution". ...read more.

This event can also link with when Stalin kicked Trotsky, Zinoviev and Kamenev out of the party because in all three incidents he was using other people's power to make himself look bigger than he was, thus being able to take power. In this situation the road was cleared for Stalin and all he had to do was to get rid of one man. Now Stalin had taken power he diverted his attention away from Party affairs and turned it to a new scheme to get Russia out of problems. The first five year plan was devised. The five year plan was supposed to re-industrialise Russia and create a self-sufficient, stable country after the problems that were caused during the civil war and the aftermath of what the Tsar left behind. Planned by Stalin and his advisors the five year plan began to industrialise Russia. Although from an external point of view this sounds good Stalin was actually using slave labour and prisoners to get the work done efficiently. If workers were in short supply then he would just go and arrest more people. Stalin's terror was not only meant to bully the people into doing what he wanted but to create a virtually free work force for himself. ...read more.

In 1926 when Stalin allied with Bukharin to defeat Zinoviev and Kamenev was not the most important reason because they were not main powers in the party and although at first shared the same ideas as Stalin did not help him in to power because the only thing that could have stopped him was the testament and not even that was greatly important. Stalin used Bukharin to make himself more popular but although Bukharin was known for good ideas again was not a big enough influence to attack Stalin. In 1929 when Bukharin was expelled from the party Stalin now grasped at power but although it helped him to get Bukharin out of the way it is not as important as when he got rid of Trotsky because if Stalin had not been able to get rid of him then he would have found it hard or even impossible to get rid of Bukharin and all his other rivals. The only event that has more importance than the rest is when Stalin kicked out Trotsky and he used effective tactics to get rid of him. This event is the reason why Stalin was able to come to power because it helped him greatly. People didn't realise how much power he had and he used it to his advantage. History Coursework Edward Mathews Centre No: 65129 ARW History Set 3 1 ...read more.