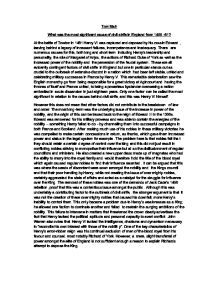 What was the most significant cause of civil strife in England from 1455-61?

Tom Bish What was the most significant cause of civil strife in England from 1455-61? At the battle of Towton in 1461 Henry VI was captured and deposed by his cousin Edward, leaving behind a legacy of incessant failures, incompetence and inadequacy. There are numerous causes for this, both long and short term including Henry's leadership and personality, the role of Margaret of Anjou, the actions of Richard Duke of York as well as the increased power of the nobility and the perversion of the feudal system. These are all evidently contingent factors of civil strife in England but one in particular stands out as crucial to the outbreak of extensive discord in a nation which had been left stable, united and celebrating military successes in France by Henry V. This remarkable deterioration saw the English monarchy go from being responsible for a great victory at Agincourt and having the thrones of itself and France united, to being a powerless bystander overseeing a nation embroiled in acute dissension in just eighteen years. Only one factor can be called the most significant in relation to the causes behind civil strife, and this was Henry VI himself. However this does not mean that other factors did not contribute to the breakdown of law and order. The most long-term was the underlying issue of the increase in power of the nobility, and the origin of this can be traced back to the reign of Edward III in the 1300s. Edward was renowned for his military prowess and was able to contain the energies of the nobility - something Henry failed to do - by channelling them into successful campaigns in both France and Scotland. After making much use of his nobles in these military victories he was compelled to make certain concessions in return, as thanks, which gave them increased power and status in the legal system for example. ...read more.

In full awareness of York's ongoing quarrel with John Beaufort, Duke of Somerset, Henry awarded the latter the government of Gascony and the title captain-general of the region. York could have only seen this as an emasculation of his authority. He may have also become alarmed at the rate at which a William de la Pole, Earl of Suffolk, led faction was monopolising patronage and power. As Ralph Griffiths put it, "Henry was enveloped by an impenetrable, self-perpetuating oligarchy" that "isolated him from alternative sources of counsel". This led to Edmund Beaufort replacing Richard of York in France and York being reappointed lieutenant of Ireland in 1447. This simultaneously demonstrates yet another personal failing of Henry VI but also provides a satisfactory explanation for York's insubordination. Warren states that Richard "rightly assumed that this was to get him out of the way" and for a man who became heir presumptive after Humphrey, Duke of Gloucester's death in 1447 this must have been incredibly infuriating. Despite this, there is still no evidence that Richard sought to depose Henry but it may be the threat to his status of heir presumptive that triggered his return from Ireland in 1450 as Henry was still childless and Suffolk arranged for his son to marry a Beaufort heiress seeing as the Beauforts had royal blood. Some may argue that his return from Ireland without permission was a sign of treason and subversion which appears a reasonable point of view seeing as the 1450 Cade's rebellion had failed and Beaufort had lost Normandy yet still remained in the Kings favour. In spite of this however, it appears that York merely wished the recognition of his status as heir apparent and the removal of Somerset. There is clear evidence for the aforementioned wish for recognition at the 1451 parliament where Thomas Yonge proposed it to the Commons on behalf of York. ...read more.

With the depletion of his resources saw a diminution in his annual income and to solve this he borrowed from his magnates, putting him further under their influence. His actions in France such as the previously explored snub of Richard of York in 1443 and his injudicious desire for peace certainly were factors. The secret cession of Maine to Charles VI and repeated losses on the battlefield such as the loss of Normandy publicised the fact that he was a poor leader of men as well as highlighting the huge contrast between his insufficient military tactics and those of his father Henry V who experienced so much success. Some may use the Polydore Virgil quote which describes Henry as a "pure, honest and holy creature" to defend Henry's weaknesses but that merely corroborates what has been argued against him. The country needed a strong and decisive leader but Henry failed to show any of the necessary qualities of a king and his mental breakdown allowed the York-Anjou conflict to infiltrate factions nationwide, effectively dividing the country in two. There is no doubt that Henry was faced with tough challenges when he reached the end of his minority, his father's untimely death meant he had to deal with home and foreign affairs from an early age but if his inheritance could survive the 15 year minority, why could it not be sustained after? Henry completely failed to deal with the issues that were facing him unlike Edward IV and Henry VII who were both able to secure their positions in the years after Henry's usurpation. The long term, underlying causes can be dismissed as minor, relatively insignificant factors that Henry simply lacked the ability to deal with and his capitulation was guaranteed even before his mental breakdown as his entire personality was the contrary of what was needed. Richard of York and Margaret of Anjou may have exacerbated and accelerated pre-existing problems but it boils down to the fact that Henry was a weak, inept King who allowed his generosity to spiral out of control and failed to recognise the implications of his actions. ...read more.