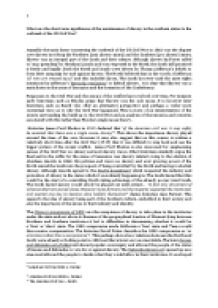 What was the short term significance of the maintenance of slavery in the southern states to the outbreak of the US Civil War?

﻿What was the short term significance of the maintenance of slavery in the southern states to the outbreak of the US Civil War? Arguably the main factor concerning the outbreak of the US Civil War in 1861 was the dispute over slavery involving the Northern (anti slavery states) and the Southern (pro slavery) states. Slavery was an integral part of the South and their culture. Although slavery had been called to ?stop spreading? by Abraham Lincoln and was respected in the North, the South still practiced it freely and legally. Both the North and South were driven by Thomas Jefferson?s beliefs to form their campaign for and against slavery. The North believed that in the words of Jefferson ?all men are created equal? and this included slaves. The South however used the state rights mentioned in Jefferson?s ?Kentucky resolutions? to defend slavery. It is clear that Slavery was a main factor in the cause of Secession and the formation of the Confederacy. Responses to the Civil War and the causes of the conflict have evolved over time. For instance early historians such as Rhodes argue that Slavery was the sole cause. It is however later historians such as Beard who offer an alternative perspective and perhaps a wider more contextual view as to why the Civil War happened. ...read more.

Another factor involving slavery was the publication of the novel ?Uncle Tom?s Cabin? by Stowe of which its anti slave theme throughout sparked more anti slave feelings in the Northern union of America. The impact of this novel alone led to Lincoln reportedly exclaiming when he saw her, ?so this is the little lady who caused this big war?[4]. This shows the importance that the book held upon the nation and the emotions it stirred between the Northern and Southern states at this crucial time. The South of course would dismiss the messages of the book. A review by the Southern Literary Messenger (1852) makes it clear that the novel is nothing more than ?fiction?. ?It is a fiction throughout; a fiction in form; a fiction in its facts; a fiction in its representations and colouring; a fiction in its morals and religion and with regard to the subjects it is designed to expound and with respect to the manner of their exposition. It is a fiction?.[5] John Brown may have also sparked off civil war hostile attitudes regarding slavery after his raid on Harpers Ferry in an attempt to stop slavery. This is the first example of physical oppression even if in this case unsuccessful. Brown would in his attempt try to free the slaves with a seizure of a southern armoury. ...read more.