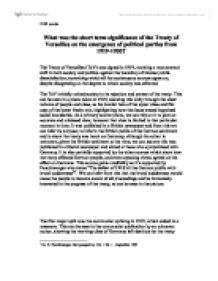 What was the short term significance of the Treaty of Versailles on the emergence of political parties from 1919-1920?

What was the short term significance of the Treaty of Versailles on the emergence of political parties from 1919-1920? The Treaty of Versailles (ToV) was signed in 1919, marking a monumental shift in both society and politics against the backdrop of intense public dissatisfaction, something which all the contempory sources agree on, despite disagreeing on the degree to which society was affected. The ToV initially united society in its rejection and protest of the treaty. This can be seen in a photo taken in 1919, showing this unity through the sheer volume of people and class, as the bowler hats of the upper class and flat caps of the lower freely mix, highlighting how this issue erased ingrained social boundaries. As a primary source photo, we can rely on it to give an accurate and unbiased view, however that view is limited to that particular moment in time. It was published in a British newspaper and from this we can infer its purpose; to inform the British public of the German sentiment and to show the treaty was harsh on Germany, although its author is unknown, given the British sentiment at the time, we can assume this was published in a liberal newspaper and aimed at those who sympathised with Germany. ...read more.

in the war had little scruples in killing communists as shown in the source; a photo from the revolution, in which it is clear these men are not Reichswehr due to their uniform, but rather Freikorps quelling communists, showing their free rein. They suffered one major problem. They lacked support from ordinary Germans, and this is seen in the parties voted for in the 1919 elections, all of which favoured democracy, a fatal weakness in 1920 during the Kapp Putsch that failed due to this lack of support because of a general strike as "they simply wanted no more trouble in their capital after experiencing the Communist rebellion in 1919."4 The reaction of Berliners showed the centrist belief within society and how extremists would not be tolerated after suffering so much at their hands. Thus, the Freikorps ceased to exist, not due to any governmental action, but due to the actions of society. However it is important to consider that by the very nature of this source, it can only show one particular moment in time, from one specific angle, and so we are limited in what we can learn from the source apart from learning the freikorps were ex-soldiers who were fighting the communists. ...read more.

It did not pacify Germany, still less permanently weaken her, appearances notwithstanding, but left here scourged, humiliated and resentful."5 Whilst Lentin outwardly disagrees with Weinberg and Barnett, he does agree that Germany was weakened and could still rise. Thus showing that whilst the source depicting German distitution can be relied upon to show how German life was, we cannot completely rely upon it to be honest as historians show life was not as bad as was made out. As such, the ToV had a huge impact upon Germany and split society down ideological lines with the extreme factions causing much destruction and suffering in the short time they existed. However it is clear that in 1919-1920, society as a whole suffered greatly and there was great discontent. However its most significant impact was not the destruction or poverty it caused, but the resentment and hatred for the treaty, which became the catalyst for WWII. 1 Dr. E J Feuchtwanger- New perspective, Vol. 1 No. 1...September 1995 2 David Andelman- A shattered Peace, Wiley and Sons, 2007 3 Gordon Williamson, The SS, Hitler's instrument of Terror, Zenith Press, 1994 4 http://www.historylearningsite.co.uk/kapp_putsch.htm 5 A. Lentin, Guilt at Versailles, Methuen, 1985 ?? ?? ?? ?? 1510 words ...read more.