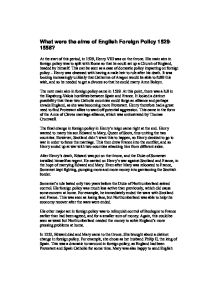 What were the aims of English Foreign Policy 1529-1558? At the start of this period, in 1529, Henry VIII was on the throne. His main aim in foreign policy was to split with Rome so that he could set up a Church of England, headed by himself. This can be seen as a case of domestic policy impacting on foreign policy - Henry was obsessed with having a male heir to rule after his death. It was looking increasingly unlikely that Catherine of Aragon would be able to fulfil this wish, and so he needed to get a divorce so that he could marry Anne Boleyn. The next main aim in foreign policy came in 1539. At this point, there was a lull in the Hapsburg-Valois hostilities between Spain and France. It looked a distinct possibility that these two Catholic countries could forge an alliance and perhaps invade England, as she was becoming more Protestant. ...read more.

For example, he immediately ended the wars with Scotland and France. This was seen as losing face, but Northumberland was able to help the economy recover after the wars were ended. His other major act in foreign policy was to relinquish control of Boulogne to France earlier than had been agreed, and for a smaller sum of money. Again, this could be seen as weak but Northumberland needed the money to solve England's more pressing problems at home. In 1553, Edward died and Mary came to the throne. She brought about a distinct change in foreign policy. For example, she chose as her husband Philip II, the king of Spain. This was a dramatic turnaround in foreign policy, as England had been Protestant and Spain Catholic for some time. Mary was also happy to send English troops to assist Spain in her wars against France. Her main aim seems to have been to please Philip II and therefore secure a firm Catholic ally. ...read more.

The overall aim was to marry Edward to Mary Queen of Scots, however she was relocated to France and so the prospects of the marriage taking place seemed slim. However, Somerset made the situation even worse by carrying on the war after Mary had moved because he was afraid of making England look weak. He tied up financial resources that could have been much better spent elsewhere. The aim of Northumberland's foreign policy, as much as he had one, was to help England's economy recover. This is why he ended the wars and relinquished control over Boulogne to France. He was then able to spend money on helping the economy, e.g. recoining and paying off debts. Mary's foreign policy cannot really be seen as successful - however, this may only be because she was not on the throne long enough to properly implement it. Sending troops to help Spain fight against France was a mistake - it caused unrest at home and it eventually resulted in the loss of Calais, which made Mary look weak. Her marriage to Philip II was unpopular at court, because there was a strong influence (faction) from Spanish advisors. ...read more.