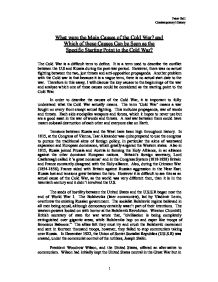 What were the Main Causes of the Cold War? and Which of these Causes Can be Seen as the Specific Starting Point to the Cold War?

What were the Main Causes of the Cold War? and Which of these Causes Can be Seen as the Specific Starting Point to the Cold War? The Cold War is a difficult term to define. It is a term used to describe the conflict between the U.S and Russia during the post-war period. However, there was no actual fighting between the two, just threats and anti-opposition propaganda. Another problem with the Cold war is that because it is a vague term, there is no actual start date to the war. Therefore in this essay, I will discuss the key causes to the beginnings of the war and analyse which one of these causes could be considered as the starting point to the Cold War. In order to describe the causes of the Cold War, it is important to fully understand what the Cold War actually means. The term 'Cold War' means a war fought on every front except actual fighting. This includes propaganda, war of words and threats. Each side stockpiles weapons and forces, which it hopes to never use but are a good asset in the war of words and threats. A real war between them could have meant colossal destruction of each other and everyone else on Earth. Tensions between Russia and the West have been high throughout history. In 1815, at the Congress of Vienna, Tsar Alexander was quite prepared to use the congress to pursue the traditional aims of foreign policy, in particular the aims of westward expansion and European dominance, which greatly angered the Western states. Also in 1815, Russia joined Prussia and Austria in forming the Holy Alliance, in an alliance against the other dominant European nations. Britain's foreign secretary, Lord Castlereagh called it 'a great nonsense' and in the Congress System (1818-1828) Britain and France constantly disagreed with the Holy alliance. Also, during the Crimean War (1854-1856), France sided with Britain against Russian aggression in the Near East. Russia lost and tensions grew between the two. ...read more.

To Westerners, this Russian advance exceeded their worst fears. In 1946, Churchill described how Russia and the west were separated by an 'Iron Curtain'. This meant that anything to the east was highly secretive and that a great division did lie between them. It showed that the communist Russia, the worlds only other proper superpower, were rivals to the US. "A conflict between the two would probably involve the use of the immensely destructive atom b**b and the world was at the mercy of these two great countries. America fully agreed with the 'Iron Curtain' speech." (Isaacs & Downing, Transworld Publishers, 1998. Pg. 44) After Britain declared it could no longer support Greece against communist forces, President Truman stepped in with what was called the 'Truman Doctrine.' The Truman Doctrine was the beginning of American policy for the Cold War. This policy was called 'containment': The USA would support any country threatened by communism, so that communism couldn't spread any further- it would be 'contained'. Truman said, "I believe it must be the policy of the U.S to support free people who are resisting attempted subjugation by armed minorities or by outside pressures." This was a very threatening speech directly aimed at Russia and any communist expansion across Europe. Most importantly, the 'Truman Doctrine' also committed the U.S to play a big part in world affairs: The U.S, not the UN, would be the world's police force. The aims of communism tend to favour the poorer classes, as everyone is equal. Therefore, in the war-ravaged and poor areas of Europe, communism would thrive. Truman and his Secretary of State, General Marshall, felt that by investing economic aid to poor areas, they would lessen the risk of Communism and increase pro-American feeling. This way they would not have to combat Russia on their own. Western European countries had to be strong to defend themselves; therefore the USA gave 4 billion dollars to help the European situation. ...read more.

Under the definition of the Cold War, this can be seen as the trigger point for the start of the war and they could now successfully challenge each other and try threatening one another to gain world supremacy. As the cold War is a war of threats and a war of words, then the two main rivals must have a balance of power. And only when Russia was able to technologically match the U.S could the Cold War properly begin. Events after this such as Korea and the arms and space race, cannot be seen as causes, as the war of threats and the breaking of the balance of power was well under way. In conclusion, tensions between the U.S and Russia began in 1918, with the birth of communism in Russia. However, during World War II the two sides had to become allies to destroy Nazism and far-eastern threats. After 1945, this alliance collapsed: no grand peace conference convened, no common fear of Germany or Japan survived, and the quarrels among the victors only grew year by year into what the U.S presidential adviser Bernard Baruch and the pundit Walter Lippmann termed a 'Cold War'. The U.S-Soviet conflict started to occur in 1945 over treatment of occupied Germany and the dropping of the first atomic b**b on Japan. The tension grew during 1946 as the Soviets communised the lands under their occupation and the U.S stated its strong anti-Communist position and coupled with its growth in military technology, it was a serious threat to Russia. The threatening Truman Doctrine, the creation of NATO, Marshall Aid, the Berlin Airlift and Russia's first testing of the Atomic b**b, all added to the tension between the U.S and Russia and made peace between the two seem an impossible feat to accomplish and are causes of the cold War. From 1947 to 1950 the reactions of Washington and Moscow to the perceived threats of the other solidified the division of Europe and much of the world into two blocs, and from then on Cold War became universalised, institutionalised, and militarised. ...read more.