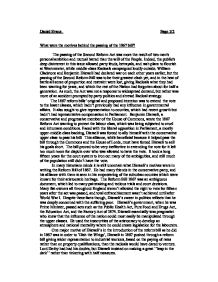 What were the motives behind the passing of the 1867 bill?

Daniel Evans Page 1/2 What were the motives behind the passing of the 1867 bill? The passing of the Second Reform Act was more the result of two men's personal ambition and mutual hatred than the will of the People. Indeed, the public's deep disinterest in this issue allowed party feuds, betrayals, and rash plans to flourish at Westminster, while middle-class Radicals campaigned loudly outside. William Gladstone and Benjamin Disraeli had declared war on each other years earlier, but the passing of the Second Reform Bill was to be their greatest clash yet, and in the heat of battle all sense of proportion and restraint were lost, giving Radicals what they had been wanting for years, and which the rest of the Nation had forgotten about for half a generation. As such, the Act was not a response to widespread demand, but rather was more of an accident prompted by party politics and shrewd Radical strategy. The 1867 reform bills' original and proposed intention was to extend the vote to the lower classes, which hadn't previously had any influence in governmental affairs. ...read more.

The Reform Bill 1867 was an ambiguous document, which led to many painstaking and tedious trials and court decisions. Many flat owners all throughout England weren't allowed the right to vote for fifteen years after the act was passed, and total enfranchisement wasn't achieved until after World War I. Despite these facts though, Disraeli's career in politics reflects that he was deeply concerned with the suffering poor. Disraeli's government, when he was Prime Minister, passed acts such as the Public Health Act, Pure Food and Drugs Act, the Education Act, and the Factory Act of 1874. Disraeli essentially was pragmatist who knew that the influence of the nation could most easily be manipulated through the upper classes. He used the insecurities of the aristocracy to develop an atmosphere and national mentality where he could create legislation for the labourers. One major motive of Disraeli's in the introduction of the reform bill as he did in 1867 was in order to 'Dish the Whigs', Disraeli in 1867 pushed through a reform bill giving wider representation to industrial workers, based on the paying of rates rather than on property qualifications, than the radicals would have dared to venture. ...read more.

This period of demonstrations was marked by an event called the Hyde Park riots conducted by the National reform League under Edmond Beales. These took place in Hyde Park when a massive group of pro reform protesters arrived to demonstrate for the cause of reform. They did this even though the home secretary had publicly banned them. On arriving at Hyde Park the protesters found that the gates were locked and they could not gain entry to the park so they proceeded to tear down fences and railings for hundreds of yards around the park before they disembarked to carry out the demonstration at Trafalgar Square. It has been said by many that these reform did further the cause of reform as 'the conservative decision to embark on further parliamentary reform was inspired by the fear of revolution'. The second reform act was motivated by a variety of factors which included bad harvests and economic conditions, public agitation for the bill and inter party rivalry to produce the best bill. I feel that the most important factors to the furthering of the reforms cause were the high levels of public agitation and the high levels of hatred shown between the two parties. These factors all continued throughout the period finally resulting in the 1867 reform act. Words- 1000 ...read more.