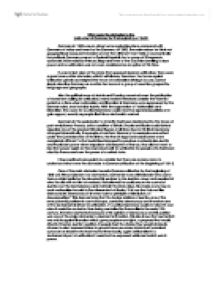 What were the obstacles to the Unification of Germany by the beginning of 1848? Germany in 1848 was an almost unrecognisable place compared with Germany of today and even by the Germany of 1890, the main reason for this is not geographical, because its borders are not that different from 1848, or economically but political, Germany was not a Federal Republic but a group of 39 separate autocratic states ruled by Princes, Kings and even other countries unwilling to lose power and so unification was not even considered as an option at this time. It was not just rulers of the states that opposed German unification, there were a great many other obstacles, which I will discuss, therefore the forces against Unification greatly outweighed the forces of nationalism driving it. So you cannot simply describe Germany as a nation but more of a group of countries grouped by language and geography. Also the political sway of Austria and Prussia prevented even the publication of statements calling for unification, many modern historians consider the Vorm�rz period as a time when nationalism and liberalism in Germany were suppressed by the German rulers, most notably Austria. With the suppression of Nationalism and Liberalism, the cause for a united Germany could never be expressed publicly and gain support, exactly as people like Prince Metternich wanted. Germany in the period prior to Vorm�rz had been decimated by the forces of post revolutionary France, only a coalition of Britain, Prussia and Russia could defeat arguably one of the greatest historical figures of all time. Due to this life in Germany changed dramatically, the people of southern Germany for example were united under the Confederation of the Rhine, the French legal and social system were completely different to the feudal laws imposed by previous overloads also Austria and Prussia lost power when Napoleon was Emperor of France, they did not want to lose that power again so they repressed calls for unification by people who had been ruled by France and saw the power of a united state. ...read more.

The majority of German speaking people were uneducated peasants who cared about their village, their crop and their overload and not really considering the internal politics of the German Confederation, it would be naive to conclude that peasants did not understand the political climate of the time, but they would care to preserve their village, family and cultural identity. On a grand scale the majority of Germans wished to preserve the status quo at this time, this benefited Austria and Prussia because their power was not threatened as long as the status quo was preserved. Particularism was an obstacle to German unification because if Germany was unified many regional identities would be replaced with a national identity, this is not what the majority of people wanted because many peasants were bound by traditional and not educated in the benefits of a unified society. Furthermore, Germany was only critically linked by the German language, and only similar in terms of culture and social policies, so it would be difficult to unite a nation based on a single common bond. Up until the Congress of Vienna in 1815 there were over 300 German states each with their own princes or rulers, autocrats, now in the Vorm�rz period (1815-48) there were now 39. The number of autocrats were getting smaller and with revolutions in France and other places, autocracy was becoming more difficult to maintain. The rulers of the 39 states were reluctant to lose any power what so ever, the quote " the only threat to those in power, is losing it" this epitomised these princes position in 1848. They had seen increased liberal and national movements and it worried them because these forces had already overthrown a powerful monarchy, France, and now it threatened them. There are many examples to prove this assumption. Firstly, the Habsburgs rule a large area of Europe almost completely autocratically and they did not want to lose any power to the middle classes, Metternich's actions demonstrated this because he represented ...read more.

War is the changing force, but in 1848 there was no changing force, no driving force for either to unite no common enemy except unification, no similarities except language. In my opinion this is the main reason why unification did not occur in the Vorm�rz period, because if they had united then many other German States would follow their lead and join them, but because they were so powerful it was never going to happen. To conclude, the obstacles to German unification at the beginning of 1848 were Metternich's thoughts, actions and views as one of the most powerful men in Germany he could have encouraged unification but he resisted it wholeheartedly therefore he was an obstacle. Also regional Particularism was another reason why German could not unite in 1848, most German were loyal to their individual states rather than the idea of a German nation also they were very proud of their regions and would not easily give up their identities and regional differences prevented unification because many regions were completely different from others. The ruling classes of Germany prevented unification because neither the aristocracy or the rulers were willing to lose power and hand it to another king they did not appoint. The Carlsbad Decrees and the Congress of Troppau were obstacles because they silenced nationalist an liberalist movements in public therefore preventing them to gain enough support for a German unification. The Confederation prevented German Unification because it secured Austria's position and did not promote unification, but the main obstacle to German unification was the rivalry between Austria and Prussia, neither would yield to the other and neither wished to unite because they could lose power. If you asked an ordinary German in 1848 he would say that he could not see a unified Germany in the near future because of the obstacles but unknown to him it was closer than he thought just 30 years off, so with all these obstacles what changed in 30 years? ?? ?? ?? ?? ...read more.