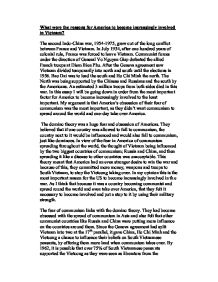 What were the reasons for America to become increasingly involved in Vietnam? The second Indo-China war, 1954-1975, grew out of the long conflict between France and Vietnam

What were the reasons for America to become increasingly involved in Vietnam? The second Indo-China war, 1954-1975, grew out of the long conflict between France and Vietnam. In July 1954, after one hundred years of colonial rule, France was forced to leave Vietnam. Communist forces under the direction of General Vo Nguyen Giap defeated the allied French troops at Diem Bien Phu. After the Geneva agreement saw Vietnam divided temporarily into north and south until the elections in 1956. Bao Dai was to lead the south and Ho Chi Minh the north. The North was being supported by the Chinese and Russians and the south by the Americans. An estimated 3 million troops from both sides died in this war. In this essay I will be going down in order from the most important factor for America to become increasingly involved to the least important. My argument is that America's obsession of their fear of communism was the most important, as they didn't want communism to spread around the world and one-day take over America. The domino theory was a huge fear and obsession of Americas. They believed that if one country was allowed to fall to communism, the country next to it would be influenced and would also fall to communism, just like dominoes. ...read more.

The Vietminh trained guerrillas to go to the south to spread the word of communism. Their weapons came from China and had financial support from Russia. This lead to America fearing the Vietcong of putting too much influence on the South Vietnamese to turn communist. South Vietnams first proper leader was Ngo Dinh Diem, who was a catholic. He had a poor record of human rights, but as this was in the era of the "domino theory", anybody who wasn't communist in the Far East was likely to receive American support. After the non-election of 1956, the Vietminh became more active militarily. Their guerrillas, now called the Vietcong, attacked soft targets in the south. They used the Ho Chi Minh trail, which was a 1000-mile long trail along the border with Laos, with heavy jungle coverage so that detection from the air was very difficult. The Vietcong were trained by their commander Giap who learned from the tactics used by Chinese troops. He expected his troops to fight and to help the South Vietnamese peasants. This caused the USA to become increasingly involved because they wanted to stop these attacks by the Vietcong and didn't want the South Vietnamese being influenced by them and turning the South into a communist country, which could lead to the domino theory. ...read more.

November 1946, the war between French and Vietminh began. The French offered the North Vietnamese people independence, however they would need permission to do anything from the French. A new leader of the country was appointed, called Bao Dai. The Russians and Eastern Europe refused to recognise his rule. They claimed Ho Chi Minh was the real ruler of Vietnam. This caused the Americans to get involved, as they didn't want Ho Chi Minh, the communist taking over. This links back to the fear of communism. The Americans gave the French money and weapons to help them win the war. Despite this help, they could not cope with the Vietminh guerrilla tactics. Finally the French were defeated and had 15,000 casualties. In conclusion I think that the domino theory which also links strongly with the fear of communism were the biggest reasons for America to become increasingly involved in Vietnam. In my opinion I thought that this war was pointless and that the Americans should have never got involved. You can tell that this war was pointless from the American troops, because most of them didn't know what they were fighting for and they also thought that it was so far away from America that it didn't really affect them. Finally I think that this was just America thinking that they have the right to police the world because they have the largest army and superior weaponry. ...read more.