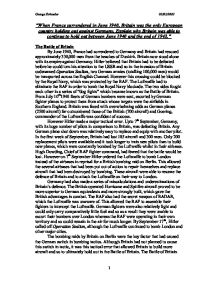 &quot;When France surrendered in June 1940, Britain was the only European country holding out against Germany. Explain why Britain was able to continue to hold out between June 1940 and the end of 1943.&quot;

"When France surrendered in June 1940, Britain was the only European country holding out against Germany. Explain why Britain was able to continue to hold out between June 1940 and the end of 1943." The Battle of Britain By June 1940, France had surrendered to Germany and Britain had rescued approximately 330,000 men from the beaches of Dunkirk. Britain now stood alone with its empire against Germany. Hitler believed that Britain had to be defeated before he could turn his attention to the USSR and so in the invasion of Britain codenamed Operation Sealion, two German armies (totalling 100,000 men) would be transported across the English Channel. However this crossing could be blocked by the Royal Navy, which was protected by the RAF. The Luftwaffe had to eliminate the RAF in order to bomb the Royal Navy blockade. The two sides fought each other in a series of "dog fights" which became known as the Battle of Britain. From July 10th1940 fleets of German bombers were sent, escorted by German fighter planes to protect them from attack whose targets were the airfields in Southern England. Britain was faced with overwhelming odds as German planes (2500 aircraft) far outnumbered those of the British (700 aircraft) and Goering, commander of the Luftwaffe was confident of success. ...read more.

Evacuation was introduced to minimise in particular the number of children killed by the bombing of major cities. Approximately 1.5 million children and young mothers were evacuated to the countryside throughout the war. The government also took direct control of 75% of Industry and by 1943 production was 8.5 times greater than in 1939. Women were conscripted in 1941 to fill in vacant jobs in industry that conscripted men held, which was vital to enabling Britain to continue the war effort. Women also joined sections of the armed forces to do important jobs and some joined the Woman's Land Army, which did everyday farming jobs, making more food available. The government used propaganda to make people inspired to help out in the war effort e.g. in factories and censored pictures of dead soldiers or destroyed houses to keep people's morale. Churchill introduced "Bulldog Spirit" to boost morale and claimed that "Dunkirk Spirit" would keep the country going. Bombed shops put signs saying "more open than usual" and people were determined to carry on with their normal lives e.g. in Coventry production rose despite suffering the worst single air raid in Britain. The king and queen visited bombed cites and made radio broadcasts, which the public were inspired by. Entertainment was organised every night to maintain public morale. ...read more.

In October 1942, Britain had defeated Germany in the battle of El-Almein. This was a major victory as it prevented Egypt and the Suez Canal from falling to German and was a serious drain on German resources as well as allowing the allies to become well placed for an invasion of Italy. It helped to keep hopes of ultimate victory alive. � � � Overall many factors were involved in enabling Britain to hold out but in my opinion, there are some major factors that without them being present, Britain could have not held out. Hitler's tactical errors are extremely important and allowed Britain to hold out in the Battle of Britain as well as allowing the USSR to defeat Germany in 1942. Had Germany not shifted tactics in the Battle of Britain, then Britain would have probably been defeated and a German invasion would have occurred. The USA was also vital in helping Britain to survive as it was a huge industrial power. It had allowed Britain to hold out in the Battle of the Atlantic even when Britain was at the point of defeat and it also helped in Africa. Without the intervention of the USA, it is very questionable as to whether Britain would have held out between June 1940 and the end of 1943. George Eskander 03/02/2002 1 George Eskander 03/02/2002 ...read more.