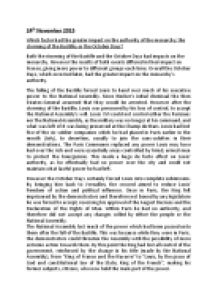 Which factor had the greater impact on the authority of the French monarchy: the storming of the Bastille; or the October Days?

The Paris Communes replaced any power Louis may have had over the rich and were essentially areas controlled by hired, armed men to protect the bourgeoisie. This made a huge de facto effect on Louis' authority, as he effectually had no power over the city and could not maintain what lawful power he had left. However the October Days certainly forced Louis into complete submission. By bringing him back to Versailles, the crowed aimed to reduce Louis' freedom of action and political influence. Once in Paris, the King felt imprisoned by the demonstrators and therefore not bound by any legislature he was forced to accept, reversing his approval of the August Decrees and the Declaration of the Rights of Man. ...read more.

By this point the King had lost all control of the government, reinforced by the change in his title (made by the National Assembly), from "King of France and the Navarre" to "Louis, by the grace of God and constitutional law of the State, King of the French", making his former subjects, citizens, who now held the main part of the power. Overall the October Days had a greater impact on the authority of the monarchy: the fall of the Bastille only caused Louis to lose the ability control the revolution, while the de jure effects of the October Days (accepting the changes to the constitution) removed the any possibility of doing so, without use of the already depleted military. ...read more.