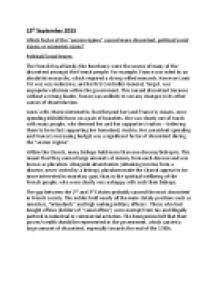 Transfer-Encoding: chunked ï»¿15th September 2015 Which factor of the “ancien régime” caused more discontent: political/social issues; or economic issues? Political/Social Issues: The French Royal family (the Bourbons) were the source of many of the discontent amongst the French people. For example, France was ruled by an absolutist monarchy, which required a strong willed monarch. However Louis XVI was very indecisive, and his first Controller-General, Turgot, was unpopular reformer within the government. This caused discontent because without a strong leader, France was unlikely to see any changes to its other causes of dissatisfaction. Louis’ wife, Marie Aintoinette, lived beyond her (and France’s) means, once spending 400,000 livres on a pair of bracelets. ...read more.

The nobles held nearly all the main stately positions such as ministers, “intendants” and high ranking military officers. Those who had bought offices (holders of “venal office”) were exempt from tax and illegally partook in industrial or commercial activities. The bourgeoisie felt that their power/wealth should be represented in the government, which caused a large amount of discontent, especially towards the end of the 1780s. ________________ Economic Issues: The system of taxation in France under the “ancien régime” was hugely unpopular. The Farmers-General was a private tax company which collected most of the indirect taxes. It was unpopular however, as people knew that most of the money was kept by the Farmers-General, and did not go to the Crown’s treasury. ...read more.

However much of this money was kept by the high ranking members of the Church for themselves. The misuse of income by the Church was one of the most common grievances mentioned in the chaiers the cahiers (lists of grievance’s made by community representatives) of 1788, and therefore caused a great deal of unrest and discontentment with the Church. Overall, the economic issues during the ancien régime were most likely those that caused the most discontent amongst French society. This was because many of the social issues (e.g. the division between classes and their disagreements) were caused by the extremes of wealth between the Estates and the privileges given the a small minority of the overall population, such as feudal dues, exemption from taxes and the corvé and better representation in government. ...read more.