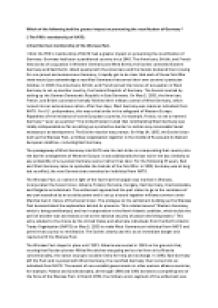 Which had the greater impact on preventing the reunification of Germany, the FRGs membership of NATO or East German membership of the Warsaw Pact?

Transfer-Encoding: chunked ﻿Which of the following had the greater impact on preventing the reunification of Germany? i) The FRG?s membership of NATO. ii) East German membership of the Warsaw Pact. I think the FRG?s membership of NATO had a greater impact on preventing the reunification of Germany. Germany had been a partitioned country since 1945. The Americans, British, and French held zones of occupation in Western Germany and West Berlin; the Soviets controlled Eastern Germany and East Berlin. Albeit openly both the Americans and the Soviets declared their craving for a re-joined and autonomous Germany, it rapidly got to be clear that each of these Cold War rivals would just acknowledge a reunified Germany that served their own country's particular hobbies. ...read more.

The Soviet reaction was prompt. On May 14, 1955, the Soviet Union built up the Warsaw Pact, a military organization together in the middle of Russia and its Eastern European satellites?including East Germany. The passageway of West Germany into NATO was the last stride in incorporating that country into the barrier arrangement of Western Europe. It was additionally the last nail in the box similarly as any probability of a re-joined Germany sooner rather than later. For the following 35 years, East and West Germany came to symbolize the hatreds of the Cold War. In 1990, Germany was at long last reunified; the new German state remained an individual from NATO. The Warsaw Pact, so named in light of the fact that the bargain was marked in Warsaw, incorporated the Soviet Union, Albania, Poland, Romania, Hungary, East Germany, Czechoslovakia, and Bulgaria as individuals. ...read more.