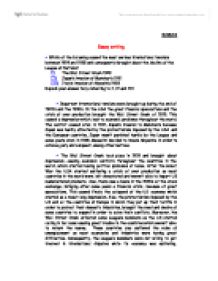 Which of the following caused the most serious international tensions between 1929 and 1935 and consequently brought about the decline of the League of Nations?I) The Wall Street Crush 1929II) Japan's invasion of Manchuria 1931

5/05/03 Essay writing ~ Which of the following caused the most serious international tensions between 1929 and 1935 and consequently brought about the decline of the League of Nations? I) The Wall Street Crush 1929 II) Japan's invasion of Manchuria 1931 III) Italy's invasion of Abyssinia 1935 Explain your answer fully referring to I, II and III. ~ Important international tensions were brought up during the end of 1920's and the 1930's. In the USA the great financial speculations and the crisis of over production brought the Wall Street Crash of 1929. This caused a depression which lead to economic problems throughout the world. The conflict caused later, in 1931, Japan's invasion to Manchuria because Japan was hardly affected by the protectionism imposed by the USA and the European countries. Japan wasn't punished hardly by the League and some years later, in 1935, Mussolini decided to invade Abyssinia in order to achieve glory and conquest, among other motives. ~ The Wall Street Crush took place in 1929 and brought about depression, causing economic conflicts throughout the countries in the world, which started having political problems at home. ...read more.

As a result, Japan invaded the Chinese region of Manchuria claiming that Chinese soldiers had sabotaged the south Manchurian railway. It is claim, that the causes are found of fallacy. China appealed to the League which hadn't the possibility of acting towards the aggressor as Japan was a leading member of it. The League of Nations took a long and frustrating delay and presented a report in it was said that Japan was wrong, so Manchuria should be returned to the Chinese. However, Japan decided to continue invading rather than to withdraw. It acted contradictory and this showed that the League was powerless. The excuses given by the League were the following: the only country it could imposed sanctions was the U.S. and it was not present in the League; Russia and the US were the only countries that could send and army against Japan but they were out of the League and the aggressor was far away. In conclusion to the League's acts, it hadn't enough power if a strong nation as Japan decided to pursue an aggressive policy and invade others. ...read more.

but as the plan was leaked to the press, it brought tension in Europe as it was showed that the League couldn't manage correctly of the situation. In addition, in May 1936 Mussolini invades the capital city and takes control of the whole country. Meanwhile, the League just watched and didn't punish Mussolini acts. The League's weakness is well shown in the case as it didn't chastise the Italian dictator because some of the permanent countries (France and Britain) needed Italy for the future so they didn't wanted to break relations with it. They only acted in their favour. The League's fail brought hard tension at the moment, as people couldn't place any longer there hopes on the organization. ~ As a conclusion, the Wall Street Crush, Japan's invasion of Manchuria in 1931 and Italy's invasion on Abyssinia in 1935 are all linked and they all caused serious international tensions. Probably, the Wall Street Crush is the main cause of the other two but however, Mussolini's acts toward Abyssinia and the few and unsuccessful work of the League in the case ended with the fail and the damage of prestige of the organization. Work by: Joaqu�n C. Benes ...read more.