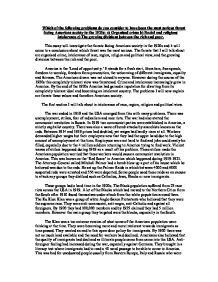 Which of the following problems do you consider to have been the most serious threat facing American society in the 1920s: a) Organised crime b) Racial and religious intolerance c) The growing divisions between the rich and poor.

Which of the following problems do you consider to have been the most serious threat facing American society in the 1920s: a) Organised crime b) Racial and religious intolerance c) The growing divisions between the rich and poor. This essay will investigate the threats facing American society in the 1920s and it will come to a conclusion about which threat was the most serious. The threats that I will talk about are organised crime, intolerance of race, region, religion and political view, and the growing divisions between the rich and the poor. America is the 'Land of opportunity.' It stands for a fresh start, liberalism, free speech, freedom to worship, freedom from persecution, the welcoming of different immigrants, equality and fairness. The American dream was not closed to anyone. However during the course of the 1920s this completely tolerant view was threatened. Crime and intolerance increasingly grew in America. By the end of the 1920s America had gained a reputation for diverting from its completely tolerant ideal and becoming an intolerant country. The problems I will now explain are threats these values and therefore American society. The first section I will talk about is intolerance of race, region, religion and political view. The war ended in 1918 and the USA emerged from this with many problems. There was unemployment, strikes, fear of radicalism and race riots. The war had also started the communist revolution in Russia. In 1919 two communist parties were established in America, a strictly capitalist country. ...read more.

However instead of solving problems it just created more problems in the form of organised crime. Bootleggers and smugglers formed gangs and brought illegal liquor into the country. They sold their alcohol on for a high profit and in turn became very rich and powerful, all through crime. Illegal liquor was being made at home and caused many problems when drank. People went blind or died. Deaths from alcohol poisoning went up from 98 in 1920 to 760 in 1926. The profits from bootlegging were so great that many people were willing to risk imprisonment. Around 2000 agents were employed to stop the illegal trade. However 1 out of 12 agents were sacked for taking bribes. It was either being beaten up and murdered by the gangs or taking a bribe. Gangsters were making 2 billion dollars a year from booze. They were becoming more and more powerful, fighting and killing other gangs, bribing or harming anyone in their way. Everyone was becoming corrupt and this wasn't good. The biggest gangs survived and had enough money to bribe anyone they wanted to and do whatever they wanted. Prohibition had not worked at all. People had gone as far to murder to keep this trade in motion and the crime that prohibition was meant to prevent had in fact just created hugely powerful gangs of crime. Americans wanted an end to prohibition. The people who had once petitioned for prohibition were now petitioning against it. The government legalised alcohol in 1932. ...read more.

All of them are serious threats but you cannot just take one and call it the most serious threat as they are all linked. The racial and religious intolerance was involved in every aspect of American life. They were the people who because of intolerance got worse jobs and became poorer than the rest of the white population. This caused the rich and poor divide. This linked the intolerance of race, region and religion with the growing divide between the rich and the poor. This divide was then extended by the gangsters becoming extremely rich off illegal alcohol trade. This money they were getting was not coming from outside the USA; it was coming from the American population. Therefore the population in America that did not sell alcohol during prohibition became poor in comparison to the gangsters which they were giving their money too. This linked the growing divide between the rich and the poor with organised crime. These gangsters were usually Italian Americans and because they killed people and were involved in lots of crime, the Italian population became discriminated against. This links the Organised Crime to the intolerance of Race, Religion, and region. Organised crime, intolerance of race, region and religion and the growing divide between the rich and the poor were all linked together. This created the threat that American society was faced with during the 1920's. Therefore I cannot answer the question by saying that there was one most serious threat as there was not. They were all part of one big threat which threatened American society in the 1920s due to the ideal that it stood for. ...read more.