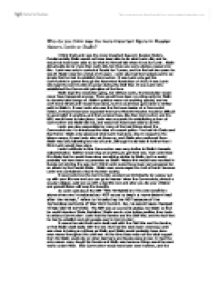 Maybe this would have resulted in Russia not winning the war, but I think Lenin would have been very prepared for an attack by the Fascist State. Stalin even encouraged the 'cult of Lenin' because Lenin was considered a God in Russian society. It was ironic how the Communists condemned Christianity for saying 'put up with your life now and you can go to heaven' when the Communists, almost a secular religion, said 'put up with a bad life now and after you die your children and grandchildren will reap the benefits. As Lenin said about the NEP "We retreated on this one condition alone when we introduced our NEP so as to begin a more determined after the retreat," refers to introducing the NEP because of the horrendous outcome of War Communism. So, he would have changed things had he survived. The NEP was an economic plateau for Stalin so that he could introduce 'State Socialism' Stalin was in a far better position than Lenin to enforce Communism. ...read more.

His brother's death had caused him to become a revolutionary, and even if it sometimes seemed that things were not dissimilar to the Tsar's reign, Russia was definitely experiencing a revolution. Lenin was on his way to industrialization of Russia in his policy of Electrification and the original putting the factories under worker's control. Stalin didn't industrialize in this way, but Lenin's way could have been as, if not more successful. Lenin began the world's first ever Communist state and will be remembered for this forever. Stalin has as much recognition as Lenin does, but he ruled for far longer and his accomplishments, while phenomenal, in a good and terrible way, were not as remarkable as Lenin's. As Trotsky fittingly said 'granted the presence of Lenin the October Revolution would have been victorious anyway' and, essentially, Stalin would never have been able to do what Lenin did by getting the Bolsheviks into power. As Helvetius said, which aptly describes Stalin, 'every period has its great men, and if these are lacking, it invents them,' ...read more.