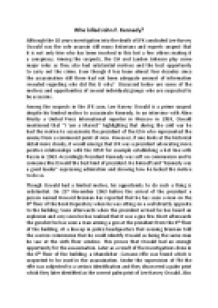 ﻿Who killed John F. Kennedy? Although the 10 years investigation into the death of JFK concluded Lee Harvey Oswald was the sole assassin still many historians and experts suspect that it is not only him who has been involved in this but a few others making it a conspiracy. Among the suspects, the CIA and Lyndon Johnson play some major roles as they also had substantial motives and the best opportunity to carry out the crime. Even though it has been almost four decades since the assassination still there had not been adequate amount of information revealed regarding who did this & why? Discussed below are some of the motives and opportunities of several individuals/groups who are suspected to be assassins. Among the suspects in the JFK case, Lee Harvey Oswald is a prime suspect despite his limited motive to assassinate Kennedy. In an interview with Aline Mosby a United Press International reporter in Moscow in 1959, Oswald mentioned that ?I ?am a Marxist? highlighting that during the cold war he had the motive to assassinate the president of the USA who represented the enemy from a communist point of view. However, if one looks at the historical detail more closely, it would emerge that JFK was a president advocating more positive relationships with the USSR for example establishing a hot line with Russia in 1963. ...read more.

Distributed in all around the globe CIA has a massive strength and control over the world. In early 1960 and 1961 CIA trained and equipped a force of Cuban exiles and inserted them into Cuba at the Bay of Pigs to attack Castro. In the battle followed the exiles were totally destroyed by Castro?s communist Cuban forces. Though CIA appealed to President Kennedy for air support it was neglected. Inevitably the exiles were totally massacred. This was a major point as many experts believe which have influenced in the assassination as both the CIA and Cuban exiles thought that they are betrayed by President Kennedy. CIA believed that Kennedy was soft on communism and secondly Kennedy resolved to downgrade the functions of the CIA and hand over many of its primary functions to other agencies. It could well have been perceived that a president soft on communism was attempting to destroy the organization whose primary role was to defend against communism. This therefore can be regarded as adequate motive and also CIA had the opportunity to place their own assassins at the scene of the crime and then cover up any involvement. Same as the motive CIA also had a substantial opportunity for this assassination. The Cuban exiles who were under the control of CIA who were well trained and equipped with military skills was a major trump they had against the JFK. ...read more.

Indicted along with Harrelson in the plot to kill Judge Wood was the brother of New Orleans crime boss Carlos Marcello, who was one of the Mafia figures identified by the Select Committee as possibly having been involved in the assassination of President Kennedy. Researcher Gary Mack asked an anthropologist to compare photos of the tall tramp with pictures of Harrelson. The anthropologist reported it was likely they were same person. Similarly, police officers trained in photo identification have advised Harrison Livingstone that Harrelson definitely appears to be the tall tramp. So far federal authorities have shown no interest in investigating Harrelson in connection with any role he might have had in the assassination. Why would the Mafia have wanted JFK dead? Quite simply, because the Kennedy administration was threatening the very existence of organized crime in America. Robert Kennedy was waging an unprecedented war on the Mafia, a war that targeted not just Mafia operations but also Mafia leaders themselves. When analysing all these theories and facts all together it?s clear that one or more of the above mentioned individuals/groups had took part in the assassination as they had the adequate motives and opportunities to carry out the assassination. Apart from them, the KGB, Anti -Castro Cuban exile groups and Lyndon B Johnson etc. too plays key roles in this drama. ...read more.