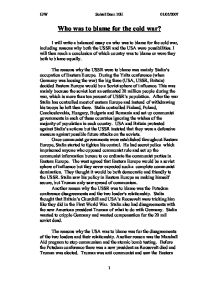 Who was to blame for the cold war?

Who was to blame for the cold war? I will write a balanced essay on who was to blame for the cold war, including reasons why both the USSR and the USA were possibilities. I will then reach a conclusion of which country was to blame or were they both to blame equally. The reasons why the USSR were to blame was mainly Stalin's occupation of Eastern Europe. During the Yalta conference (when Germany was loosing the war) the big three (USA, USSR, Britain) decided Eastern Europe would be a Soviet sphere of influence. This was mainly because the soviet lost an estimated 20 million people during the war, which is more than ten percent of USSR's population. After the war Stalin has controlled most of eastern Europe and instead of withdrawing his troops he left then there. ...read more.

Another reason why the USSR was to blame was the Potsdam conference disagreements and the two leader's relationship. Stalin thought that Britain's Churchill and USA's Roosevelt were tricking him like they did in the First World War. Stalin also had disagreements with the new American president Truman of what to do with Germany. Stalin wanted to cripple Germany and wanted compensation for the 20 mil soviet dead. The reasons why the USA was to blame was for the disagreements of the two leaders and their relationship. Another reason was the Marshall Aid program to stop communism and the atomic bomb testing. Before the Potsdam conference there was a new president as Roosevelt died and Truman was elected. Truman was anti communist and saw the Eastern Europe take over as preparations for a Europe takeover by Stalin and a spread of communism. ...read more.

Stalin viewed the Marshall Aid plan as having anti communist aims and the USA's plan to dominate as many states as possible by making them dependent on dollars. In fact he forbade any Eastern Europe states to apply for Marshall Aid as he thought it would weaken his hold on Eastern Europe. My conclusion of the essay is that USSR was the one to start the cold war but USA also contributed in these acts which led to the cold war so both are to blame. The soviets started by occupying eastern Europe for its own gain of spreading communism and stopping any chance of an attack on the USSR with any means necessary. The USA started Marshall aid to stop the spread of communism but they also did it to create markets for American goods which is an economic aim and that contributes to the blame of the cold war. H/W Sohail Deen 10H 01/05/2007 1 ...read more.