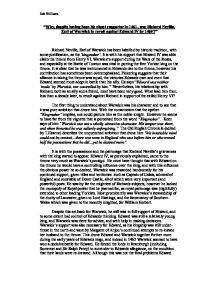 &quot;Why, despite having been his closet supporter in 1461, was Richard Neville, Earl of Warwickin revolt against Edward IV by 1469?&quot;

"Why, despite having been his closet supporter in 1461, was Richard Neville, Earl of Warwick in revolt against Edward IV by 1469?" Richard Neville, Earl of Warwick has been labelled by historic tradition, with some justification, as the 'kingmaker'. It is with his support that Edward IV was able claim the throne from Henry VI, Warwick's support during the Wars of the Roses, and especially at the Battle of Towton was vital in putting the first Yorkist king on the throne. It is clear that he was instrumental in Edwards rise to the throne, however his contribution has sometimes been overemphasised. Pickering suggests that their alliance in taking the throne was equal, the victories Edwards own and even that Edward seemed more adept in battle than his ally. He says "Edward was neither 'made' by Warwick, nor controlled by him." Nevertheless, his relationship with Richard, both as an ally and a friend, must have been very good. What lead him then, less than a decade later, to revolt against Richard in support of the exiled Henry VI? The first thing to understand about Warwick was his character and to see that it was pure ambition that drove him. With the romanticism that the epithet "Kingmaker" implies, one could picture him as the noble-knight. ...read more.

greatly displeased with the king...And yet they were reconciled several times; but they never loved each other afterwards" One must however beware of putting, as traditionally been done, too much emphasise on this marriage as a turning point in the relationships between Edward IV and Richard Neville. It is certainly a major factor in the breakdown of their relationship, however one must take into account that it occurred five years before Warwick's revolt, and Warwick, at least publicly, still supported the king during these years. Having said this, Richards marriage, though romantic and loving, was a serious, irresponsible mistake for a king to make. Elizabeth was, by Richards's standards, a commoner. Edward was the first king since the Norman Conquest to marry a commoner; however this was not really the problem it was that he missed out on strengthening his position as king by arranging a more political marriage. Furthermore by marrying a Woodville, he alienated his other major noble families, especially the Neville's. The Woodvilles, much to Warwick's and others annoyance, managed with this marriage to promote their family to the upper echelons of the English aristocracy. It also enabled them to marry off some of their 'lesser relations' to be married to either nobility or families of a very high standing which further enhanced their political position. ...read more.

At much the same time, however, Warwick was engineering the marriage, against the Kings wishes, of his daughter, Isabel, to the king's younger brother and presumptive heir, George, Duke of Clarence. He would, if this marriage went ahead, become immediately more powerful, and a pose a threat to the Woodville's dominance. Clarence, like Warwick, was extremely ambitious and would do almost anything to further his own cause. By the spring of 1469 Warwick and Clarence were in league with one another and also with Louis XI to undermine the Woodville's, and possibly to over throw the king. Pickering says "Clarence encouraged Warwick to turn against the King and helped spread the rumour that his brother was not Duke Richard's son but the b*****d of an archer called Blaybourne" This rumour was almost certainly unfounded, yet both risked turning against their own king They did this for their own gain, one with the view of taking his brothers place as king, the other with the view to once again controlling the king himself. Thus in July 1469, Clarence defied his brother's wishes and married Isabel and on the 12th July, Warwick, with the support of his brother Archbishop Neville and George, Duke of Clarence, published the 'Calais Manifesto'. Rob Williams ...read more.