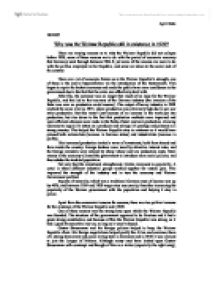 Why, despite its enemies, was the Weimar Republic still in existence in 1929?

10/11/07 Why was the Weimar Republic still in existence in 1929? There are varying reasons as to why the Weimar Republic did not collapse before 1929, some of these reasons are to do with the period of economic recovery that Germany went through between 1924-9, yet some of the reasons are more to do with the politics employed in the Republic, and some are down to the social side of the country. There are a lot of economic factors as to the Weimar Republic's strength; one of these is the end to hyperinflation via the introduction of the Rentenmark. This began to repair the broken economy and made the public have more confidence in the government due to the fact that the crisis was effectively dealt with. After this, the currency was no longer that much of an issue for the Weimar Republic, and this led to the recovery of the German industry (the invasion of the Ruhr was over so production could resume). ...read more.

One of these reasons was the strong base upon which the Weimar Republic was founded. The structure of the government appeared to be flawless and it had a good, strong constitution; and because of this the Weimar Republic was strong, as it had a good framework to rely on; as long as it wasn't abused. Gustav Stresemann and his foreign policies helped to keep the Weimar Republic afloat. His foreign negotiations helped pacify the Allies and convince them of a strong democracy and peace loving state in Germany and in 1926 it was allowed to join the League of Nations. Although many may have looked upon Gustav Stresemann with contempt and though of him as a traitor (especially the right wing), he did achieve breakthroughs with reversing clauses of the Treaty of Versailles; such as the French evacuating the Ruhr five years earlier than set out in the Treaty. These breakthroughs lessened the 'fuel' for the Right Wing to work with, as one of their main aims was the elimination of the Treaty of Versailles, ...read more.

and thus be more willing to give the Republic more of a chance. This is apparent in the 1928 elections where extremists suffered a loss of seats and the moderates experienced a gain. Another explanation for this, however, is the utter disorganization of the extreme left and extreme right. They were spread out across the country, not united and therefore unable to make a succinct and successful attack upon the Weimar Republic. Another reason for the survival of the Republic was the diversion in the form of public hatred of the French, especially after the disaster that was the invasion of the Ruhr in 1923. This took pressure off of the Government and made it easier for them to take control. Overall I feel that the Republic survived for a variety of reasons, and in my opinion the main reasons were the decline in extremism in the late 1920's and the improvement of the economy. The public began to accept the Republic and were not drawn wayward by any extremists during the 'boom' years in the late 1920's, so the Republic was still in existence in 1929. ?? ?? ?? ?? April Betts ...read more.