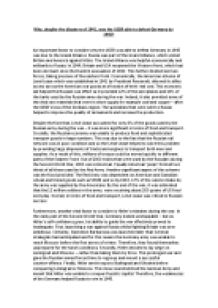 ﻿Why, despite the disasters of 1941, was the USSR able to defeat Germany by 1945? An important factor to consider why the USSR was able to defeat Germany in 1945 was due to the Grand Alliance. Russia was part of the Grand Alliance, which united Britain and America against Hitler. The Grand Alliance was helpful economically and militarily to Russia. In 1944, Britain and USA reopened the Western front, which had been dormant since the Dunkirk evacuation of 1940. This further divided German forces, taking pressure of the eastern front. Economically, the American scheme of Lend-Lease which was established in 1941 by President Roosevelt, allowed its allies access across the American war goods at a fraction of their real cost. This economic aid helped the Russian war effort as it provided 12% of the aeroplanes and 10% of the tanks used by the Russian army during the war. Indeed, it also provided some of the vital raw materials that were in short supply for example coal and copper ? after the USSR?s loss of the Donbass region. The specialists that were sent to Russia helped to improve the quality of armaments and increase the production. ...read more.

Finally, Hitler sent troops to Stalingrad and Ukraine before conquering Leningrad or Moscow. This move overstretched the German Army and meant that Hitler was unable to conquer Russia?s capital. Therefore, the weaknesses of the Germans helped Russia to win in 1945. The last but most essential factor to consider is the mobilisation of the Russian nation. Stalin was under no illusions that communism was being to be unpopular in Russia, due to the Great Terror and the failures of Stalin?s economic policy and he also knew that traditional communist propaganda would not mobilise the Russian people. Therefore, he tried appealed to Russian patriotism. The war itself was named ?THE GREAT PATRIOTIC WAR? and Russian people were encouraged to use nationalist nicknames such as ?Fritz? to refer to the Germans. Patriotism helped Stalin to win the war, because it provided the Russians with a reason to fight. Joseph Stalin shrewdly altered the presentation of communist ideology during the war by making an alliance with the Church. Despite that, religion was still controlled by Stalin and the party ? the leader of the Russian Orthodox Church proclaimed that Stalin was ?God?s chosen leader? and that the fight against Germany was a Holy War. ...read more.

In addition, the opening of new fronts in North Africa and Western Europe ? forced the Germans to overstretch their troops. Another key main reason for Russia?s victory in the Second World War was Hitler?s strategic mistakes. Hitler could have taken Moscow by storm and in so doing knocked Russia out of the war. However, he chose to besiege the city and therefore gave General Zhukov time to organise a counter-attack and Gosplan time to develop a war economy. But, the most important and crucial factor to explain why the USSR was able to defeat Germany in 1945 was the mobilisation of the Home Front. Stalin knew that the teachings of the Church would inspire soldiers and their families back home to continue the fight for victory as the promise of heaven would be a comfort in the face of suffering and death. In this way, the Home Front was crucial to Russia?s victory in the Second World War because of the careful use of propaganda and the appeal of the Church motivated the Russian people to fight with all their heart and soul for victory. This resulted in 10% of the Russian population to die for the Motherland. Without the will and determination of the Russia people they would not have been able to save their country from defeat and ensured her victory. ...read more.