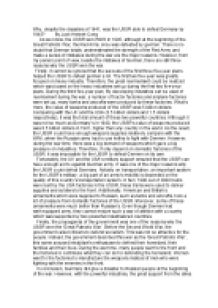 ﻿Why, despite the disasters of 1941, was the USSR able to defeat Germany by 1945? By Jack Herbert Cong As we know, the USSR won WWII in 1945, although at the beginning of the Great Patriotic War, the Red Army once was defeated by germen. There is no doubt that German totally underestimated the strength of the Red Army and made a series of mistakes during the war are the major reasons. However, from my person point of view, beside the mistakes of Germen, there are still three reasons why the USSR won the war. Firstly, it cannot be ignored that the success of the first three five-year plans helped the USSR to defeat germen a lot. ...read more.

As the result, the USSR could have enough weapons supplies relatively compare with the WWI, when the Russian army had to use knifes to fight with Germen. However, during the war time, there was a big demand of weapons which gave a big pressure on industries. Therefore, if only depend on domestic factories of the USSR; it was impossible for the USSR to defeat Germen on its own. Fortunately, the UK and the USA?s military support ensured that the USSR can have enough aid to against German army. It was one of the major reasons why the USSR could defeat Germany. Notably on transportation, an important system for the USSR?s military, a big part of an army?s mobility is depended on the quality of this country?s transportation system. ...read more.

Before the Second World War, the government called citizens to defend socialism. This was not so attractive for the people. Instead, the government described this war as the ?Great Patriotic War?, this name aroused inhabitant?s enthusiasm to defend their homeland, their families and their lives. During the war time, many people went to the front and the factories to contribute what they can do for defending the homeland. Women went to the factories to manufacture the weapons instead of men who were fighting with the enemies in the front. In conclusion, Germany did give a disaster to Russian people at the beginning of the war. However, with the powerful industries, the great support from the allies and the patriotic people?s support, the USSR had finally won the Second World War. ...read more.