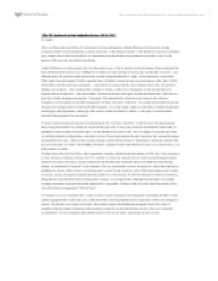 "Why Did Americans Fear Mass Immigration between 1890 & 1920?" (12 marks) There were three main causal factors for Americans to fear mass immigration: cultural differences, between newly arriving immigrants and the American population; economic tension due to the changes in people's work situations as America's population grew, and the effects of the First World War. It is important to note that all these factors influenced each other, even if, for the purpose of this essay, they are looked at in isolation. Cultural differences are easily argued to have been the greatest cause of fear in America towards immigrants. Many immigrants had been sold the idea that America was a 'Melting Pot' of cultures, but upon arriving in America, they'd realise this was not the case. ...read more.

As so many people sought out communities of similar backgrounds and languages, this perpetuated a cultural gap. This America is better described as a Mosaic: a wide range of racial and ethnic elements living segregated from one another. Economic tension also played a large part in emphasising the fear Americans 'should' have held for newly arriving immigrants. Many immigrants left their own countries in search for better paid work. In turn, many Americans feared that the sudden influx in population would cause them to lose their jobs. It was true that the newly arrived work force was happy to accept less pay as this was still better than the livelihoods they could achieve before. This not only undercut the other Americans, but weakened the unions and standard levels of pay. ...read more.

against Jews of East Europe. By 1905, the Russian Revolution was underway; during this time many Russians and Jews immigrated to America to avoid persecution. Although many Russians were actually escaping communism, Americans feared their supposed left-wing politics. Evidence of this fear can be found from the late 1940s, when McCarthyism propagandised "The Red Scare". To conclude, it is easy to summarise that a variety of factors caused Americans to fear immigration. I personally feel that it was the cultural segregation that was the main cause, as this allowed the American population to live in ignorance of the newly immigrated citizens. The idea that "out of sight, out of mind" allowed them to ignore the hardship the immigrants faced, led to a lack of sympathy so that the original Americans could concentrate exclusively on what directly their own lives. However, it is broadly accepted that it was mass immigration that enabled America to become the multi-cultural super power it is today. ...read more.