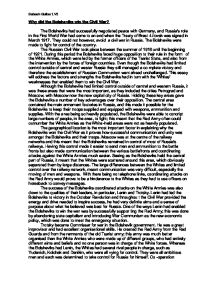 Why did bolsheviks win civil war

Why did the Bolsheviks win the Civil War? The Bolsheviks had successfully negotiated peace with Germany, and Russia's role in the First World War had come to an end when the Treaty of Brest-Litovsk was signed in March 1917. They could not however, avoid a civil war in Russia. The Bolsheviks were made to fight for control of the country. The Russian Civil War took place between the summer of 1918 until the beginning of 1921. During this period the Bolsheviks faced huge opposition to their rule in the form of the White Armies, which were led by the former officers of the Tsarist State, and also from the intervention by the forces of foreign countries. Even though the Bolsheviks had limited control outside of central and wester Russia they still managed a complete victory and therefore the establishment of Russian Communism went ahead unchallenged. This essay will address the factors and strengths the Bolsheviks had in turn with the 'Whites' weaknesses that enabled them to win the Civil War. Although the Bolsheviks had limited control outside of central and western Russia, it was these areas that were the most important, as they included the cities Petrograd and Moscow, with Moscow now the new capital city of Russia. ...read more.

Trotsky became Commissar for war in the Bolshevik government. He was a great improvisor and had excellent organisational skills. He created the Red Army from the Red Guards and from the remnants of the old Tsarist army; this army was much better organised than the White Armies who were made up of different groups, who had entirely different aims and beliefs and no one person was in charge of the White forces. Whereas the Bolsheviks had Lenin, the Whites had several rival people in charge, such as Yudenich, Kolchak and Denikin, who were all vying for control. They were all ambitious men and each was determined to take control for Russia for himself. Co-operation between these leaders was difficult as they could not agree on whether they were fighting for monarchism, republicanism or for the Constituent Assembly. These different opinions meant that the Whites had little chance of developing a coordinated military strategy, as often the White generals would not work together because they did not like or trust each other and they were all suspicious of each others motives. As a result, there was virtually no cooperation between the various White Armies as they fought independently, making it easier for the Red Army to defeat each of them individually. ...read more.

In this way, support for the Bolsheviks was organised and built up successfully. The Bolsheviks were also handed a propaganda coup in the form of the intervention if foreign forces, which should've have worked in the Whites favour but didn't because it allowed the Bolsheviks to portray themselves as defenders of Russian soil against foreign invaders. Having a successful propaganda campaign enabled the Bolsheviks to receive large amounts of support from the peasants, which would be crucial since they supplied the main body of the soldiers. Lenin used successful propaganda to gain the support of the peasants who otherwise had little love for either side but the peasants would also have been more inclines to support the Bolsheviks as Lenin had legitimised their right to lands, whereas the Whites made it clear that the land would be restored to its former owners. By the end of the Civil War in 1921 the Bolsheviks had succeeded in securing their grip on power in Russia and the White Armies and foreign powers fighting in Russia had been defeated. The Bolsheviks were able to win the Civil War because they were in a well placed located that enabled them to be organised in unity, under good leadership, which used propaganda to maintain large amounts of support.1 1 Sabaah Gulbar LV2 Sabaah Gulbar LV2 ...read more.