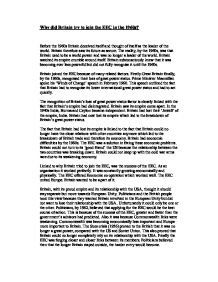 Why did Britain try to join the EEC in the 1960s? Before the 1960s Britain deceived itself and thought of itself as the leader of the world. Britain therefore saw its future as secure. The reality, by the 1960s, was that Britain used to be a world power and was no longer a leader of the world. Britain watched its empire crumble around itself. Britain subconsciously knew that it was becoming ever less powerful but did not fully recognise it until the 1960s. Britain joined the EEC because of many related factors. Firstly Great Britain finally, by the 1960s, recognised their loss of great power status. Prime Minister Macmillan spoke his 'Winds of Change' speech in February 1960. ...read more.

Britain had economic difficulties by the 1960s. The EEC was a solution in fixing these economic problems. Britain could not turn to its 'good friend' the US because the relationship between the two countries was breaking down. Britain could not keep up with the cold war arms race due to its weakening economy. Linked to why Britain tried to join the EEC, was the success of the EEC. As an organisation it worked perfectly. It was constantly growing economically and physically. The EEC offered Economic co operation which worked well. The EEC united Europe. Britain wanted to be a part of it. Britain, with its proud empire and its relationship with the USA, thought it should stay separate but move towards European Unity. ...read more.

Also it was because Commonwealth links were weakening. Commonwealth was becoming economically less important and Europe more important to Britain. The Sues crisis (1956) proved to the British that it was no longer a great power, compared with the US and Soviet Union. This also proved that Britain could no longer completely rely on its relationship with the USA. Finally the EEC was forging closer and closer links between its members. Politicians believed then that the longer Britain stayed outside, the harder entry would become. I think Britain was a proud country, even in the 1960s, and despite watching its empire crumble and its relationships breakdown, Britain was still important. I think Britain saw the EEC, when it was set up, and would never dream of joining it because Britain was a 'world leader'. Once Britain realised the situation it was in, Britain tried to join the EEC realising it was the best course of action. ...read more.