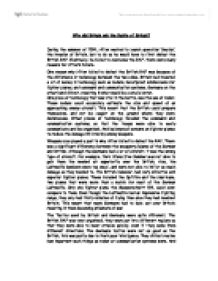 Why did Britain win the Battle of Britain

Why did Britain win the Battle of Britain? During the summer of 1094, Hitler wanted to launch operation 'Sealion', the invasion of Britain, but to do so he would have to first defeat the British RAF. Eventually, he failed to overcome the RAF, there were many reasons for Hitler's failure. One reason why Hitler failed to defeat the British RAF was because of the difference in technology between the two sides. Britain had invested a lot of money in technology such as radars, bulletproof windscreens for fighter planes, and command and communication systems. Germany on the other hand did not, resulting in what would be a crucial error. One piece of technology that was vital in the battle, was the use of radar. These radars could accurately estimate the size and speed of an approaching enemy aircraft. ...read more.

These included the Spitfire and the Hurricane, two planes that were more than a match for most of the German Luftwaffe. Only one fighter plane; the Messerschmitt 109, could even compare to them. Even though the Luftwaffe had an impressive fighting range, they only had thirty minutes of flying time once they had reached Britain. This meant that many Germans had to bale out over Britain, resulting in them becoming prisoners of war. The Tactics used by Britain and Germany were quite different. The British RAF was very organised, they were put into different regions so that they were able to meet attacks quickly, even if they came from different directions. The Germans tactics were not as good as the British, this was partly due to their poor intelligence. ...read more.

Overall, there were many reasons why Hitler failed to overcome the RAF, and why Britain won the Battle of Britain. Many factors favoured Britain during the war, such as the technology, leadership and the mistakes made by the opposition. Britain's technology was far more advanced than the Germans at the time and helped the British greatly during the course of the battle. Their weapons and planes were also more effective, as such British planes as the Spitfire and Hurricane were more than a match for the Luftwaffe. Britain's tactics were also very good, but this largely due to their good and experienced leaders such as Sir Hugh Dowding. And finally, the mistakes that Hitler and Germany made during, and before the battle, helped Britain greatly. ?? ?? ?? ?? ...read more.