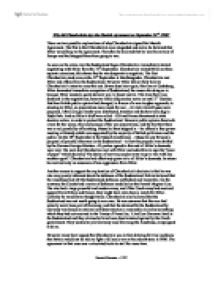 Why did Chamberlain sign the MunichAgreement on September 30th 1938?

Why did Chamberlain sign the Munich Agreement on September 30th 1938? There are two possible explanations of why Chamberlain signed the Munich Agreement. The first is that Chamberlain was misguided and naive; he believed that Hitler would keep to the agreement. Therefore he believed that he was the saviour of Europe and had stopped them from going to war. As soon as the crisis over the Sudetenland began Chamberlain immediately started negotiating with Hitler from the 15th September. Chamberlain visited Hitler on three separate occasions, this shows that he was desperate to negotiate. The first Chamberlain made was on the 15th September at Berchtesgaden. Chamberlain met Hitler and offered him the Sudetenland. However Hitler did not fully believe Chamberlain's intent to carry this out. Seven days later again, this time at Godesberg, Hitler demanded immediate occupation of Sudetenland, the reason for doing so is because Hitler needed a quick decisive war, to boost morale. This time there was deadlock in the negotiations, however Hitler did promise not to act until 1st October. ...read more.

Chamberlain had effectively given in to all Hitler's demands. In return he received only an assurance of non-aggression from Hitler. Another reason to support the explanation of Chamberlain's decision is that he was also very poorly informed about the defences of the Sudetenland. Britain believed that the Anschluss had left the Sudetenland defences outflanked and vulnerable. On the contrary, the Czechs had a series of defences modelled on the French Maginot Line. The also had a large powerful and modern army, and if the Czech army had received support from Britain and France, they might have even been a match for Hitler. Certainly he would have thought twice. Chamberlain also believed that the Sudetenland was not worth going to war over. He was unaware that the area had actually never been part of Germany, and that the demand for the Sudetenland by Germany was based on national self-determination a reasonable claim but something which they had not received in the Treaty of Versailles. 3.5million Germans lived in the Sudetenland and they claimed to have been discriminated against by the Czech government. ...read more.

So in fact Chamberlain was just following what the public wanted. The press and public supported his view that this was "a quarrel" in a far away country between people of whom we nothing" As a result of signing the Munich agreement, Britain and France were able to stall for time, allowing them to rearm, but the delay also gave Germany a chance to rearm as well - more than Britain and France achieved in 1938/39. They had also lost the moral high ground due to the fact that they had given into an aggressor. A few days later, after Munich, British public opinion turned again, this time against Chamberlain for signing the agreement, especially after Hitler took over the rest of Czechoslovakia in March 1939. In conclusion I believe that the reason for Chamberlain signing the Munich agreement was in fact a mixture of the above two reasons. Chamberlain probably knew that Britain was not strong enough to go to war and was trying to gain some time in order for them to rearm. However at the same time he probably trusted Hitler too much and possibly believed that Hitler would stop his aggression if German grievances were addressed. Ramesh Kanesan -- UVC ...read more.