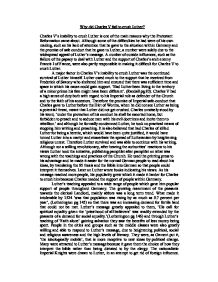 Why did Charles V fail to crush Luther?

Why did Charles V fail to crush Luther? Charles V's inability to crush Luther is one of the main reasons why the Protestant Reformation came about. Although some of the difficulties he had were of his own making, such as his lack of attention that he gave to the situation within Germany and the promise of safe conduct that he gave to Luther, a number were solely due to the widespread appeal of Luther's message. A number of outside influences, such as the failure of the papacy to deal with Luther and the support of Charles's arch enemy Francis I of France, were also partly responsible in making it difficult for Charles V to crush Luther. A major factor in Charles V's inability to crush Luther was the continued survival of Luther himself. Luther owed much to the support that he received from Frederick of Saxony who sheltered him and ensured that there was sufficient time and space in which his cause could gain support. 'Had Luther been living in the territory of a minor prince his fate might have been different'. (Randall pg.82). Charles V had a high sense of duty both with regard to his Imperial role as defender of the Church and to the faith of his ancestors. ...read more.

However, the Church failed to act against Luther because it was badly organised and hated by the German people. The state of the Church was very corrupt and had many fundamental problems. Weaknesses such as nepotism, where land was given to clergy's illegitimate children, simony when priests sold offices for profits and nepotism, angered many people who simply felt they were being conned. The whole German clergy came under fire for living a luxurious life at the expense of the ordinary people who bitterly resented papal taxation that was imposed on them. Luther's message tapped into these concerns Luther and therefore he already had a market of receptive people who believed that the church was not catering for their religious needs. The organisation of the church was also in a very bad state. Charles V naively relied on the General council of the Church to settle disputes. They got together to make decisions about what should happen to Luther and how he should be disciplined. However they all had differing ideas about the action that should be taken concerning Luther and were therefore slow in doing so. This was shown by the length of time that it took them to finally excommunicate Luther. Without a strong church to support him Charles found it hard to crush Luther. ...read more.

Therefore because the Bishops and Princes Charles needed to crush Luther was unwilling to support him and because Lutheranism gained an armed force, he was unable to crush Luther. There were therefore, a number of significant personal and political problems that Charles V had to face in crushing Lutheranism. Problems such as his inability to realise the threat Lutheranism posed and his inability to crush Luther at the Diet of Worms in 1521, certainly made it hard for Charles to crush Luther. The appeal of Luther's message also goes along way in showing how Charles was unable to crush Luther. He gained support from a wide range of people who saw something in his message that benefited them. Most noticeably, Luther appealed to the princes which made it increasingly difficult for Charles to crush Luther because he needed their support. The failure of the Catholic Church to deal with Luther also made it difficult. This included organisational weaknesses such as the failure of the General Council of the Church and weaknesses of the pope who did nothing to stop the word of Luther spreading. In my opinion the most important reason why Charles did not crush Luther was because he underestimated the true threat that he posed. By the time that he had had realised the full extent of Luther's message, it was too strong to combat. ...read more.