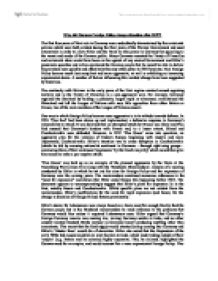 Why did German Foreign Policy change direction after 1937? The first four years of n**i rule in Germany were undoubtedly characterised by the revisionist policies which were both evident during the final years of the Weimar Government and used extensively in order to allow Hitler and the Nazis to take power in Germany by appealing to the wants and needs of the German public. Many Germans resented the Treaty of Versailles and revisionist ideas would have been on the agenda of any elected Government and Hitler's passionate speeches and rallies convinced the German people that he would be able to deliver his promises more quickly and effectively than any other party. In 1937 however, n**i Foreign Policy became much less compliant and more aggressive, as well as exhibiting an increasing expansionist desire. A number of factors influencing this marked change have been suggested by historians. The continuity with Weimar in the early years of the n**i regime centred around regaining territory lost in the Treaty of Versailles in a non-aggressive way. For example, Germany regained the Saarland by holding a plebiscite, began rapid re-armament, remilitarised the Rhineland and left the League of Nations with very little opposition from either Britain or France, two of the main members of the League of Nations council. ...read more.

This, he claimed, highlighted the German need for an empire, and would account for a more expansionist Foreign Policy. This idea was used when the Anschluss with Austria was completed. Germany gained 100,000 men for its Army as well as access to Austria's plentiful Foreign Currency reserves and industrial output, such as steel. The Anschluss was also important for the implementation of a new, expansionist Foreign Policy not because it was thought of as Lebensraum itself, but because it was strategically important for both the attack of Czechoslovakia and defence against Britain and France. Hitler is quoted as saying, in the Hossbach Memorandum, that "our first objective...must be to overthrow Czechoslovakia and Austria simultaneously in order to remove the threat from our flank of any possible operation in the West". In other words he was wary of the fact that as France was an ally of Czechoslovakia, France may be able to resist a German invasion of Russia or the Balkan states. The Czech border with Germany was heavily defended but the Czech border with Austria was hardly defended at all, and it would therefore be much easier for the German Army to attack Czechoslovakia from there. Anschluss with Austria was also crucial to any plan of defence against a British or French attack as it formed an unbroken front from Germany, through Austria, to Italy. ...read more.

He was present at the meeting in 1937 from which the Hossbach Memorandum was written and subsequently expressed his dislike of the Fuhrer's proposals, a move which saw him removed from office within three months along with many other senior n**i members. He was replaced by Ribbentrop, a more compliant, if hopeless, Foreign Minister. This final move by Hitler allowed him to embark on a rapidly changing Foreign Policy with little interference from senior Party members, with the eventual goal being the acquisition of Lebensraum. In conclusion, there were two main types of reason as to why German Foreign Policy changed direction in 1937. The first of these is the improving International situation which Germany found itself facing and the way in which Hitler saw this progressing. For example, the failure of the League of Nations, the prospect of facing a policy of appeasement and increased alliances with Italy and Japan, all meant that German expansion would not face as strong an opposition as in previous years. The second type of reason relates to Internal pressures, within Germany. Hitler foresaw the problems associated with maintaining a military-based economy and isolation, i.e. that the German people would soon face severe food shortages and were becoming increasingly discontent with the lack of consumer goods available. His solution to these problems was to aim for "expansion" (war with Russia) within the next few years, while Germany still had the support of an army of workers and an arms advantage. ...read more.