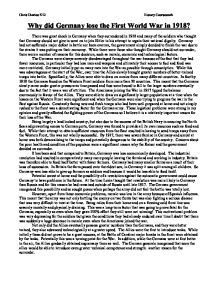 Why did Germany lose the First World War in 1918?

Why did Germany lose the First World War in 1918? There was great shock in Germany when they surrendered in 1918 and many of the soldiers who thought that Germany should not give in went on to join Hitler in his attempt to regain their national dignity. Germany had not suffered a major defeat in battle nor been overran, the government simply decided to finish the war due to the strains it was putting on their economy. While there were those who thought Germany should not surrender, there were a number of reasons for this decision, such as morale, economic and technological factors. The Germans were always severely disadvantaged throughout the war because of the fact that they had fewer resources; in particular they had less men and weapons and ultimately their access to fuel and food was more restricted. Germany initially put as many men into the War as possible through conscription. While this was advantageous at the start of the War, over time the Allies slowly brought greater numbers of better-trained troops into battle. Specifically, the Allies were able to draw on armies from many different countries. In fact by 1918 the Germans faced on the Western Front soldiers from more than 30 countries. This meant that the Germans slowly came under greater pressure as time passed and thus were bound to fall to the larger numbers eventually due to the fact that it was a war of attrition. ...read more.

The Allies were the first to introduce tanks. While initially these did not prove to be a great success, at the Battle of Cambrai major breaks in the front were obtained by the tanks. Potentially this was a turning point for the War. In addition, while the Germans were at first better in the air, the Allies gradually obtained supremacy there as well. The German generals recognised that soon the allies would be able to introduce even greater technical competence and strength: another reason for the surrender. This technology was integrated well in terms of attack formation and tactics, this meant that the Allies were able to sustain fewer losses while attacking and inflict heavy losses while defending. This was in a few main areas to maximise the possible effect. Machine guns were introduced in bunkers that could fire up to 600rounds per minute and replace up to 125men. Artillery was one of the main areas for improvement because they had greater accuracy, rate of fire and power. It was used to damage the enemy just before an infantry and tank attack began. When combined with spotter planes to find out what was happening on the frontline it became very effective to make the enemy deal with two problems at once. The artillery could be fitted with lead shells that were very damaging to personnel or explosive shell that caused great damage or with gas that caused chaos just imminent to an attack as it meant the Germans had to worry about getting their gas masks on before they could defend themselves. ...read more.

This was quite possibly the main reason for the defeat of the Germans after the integration of technology. In conclusion the Germans would not have lost the war given just one of the problems listed above, but given a combination of them it was impossible for Germany to win. The factors all contributed together to leave a weakened Germany defeated. Most important was the technological integration; this is because it easily doubled the fighting power of an equivalent army and allowed the weaknesses in the Germans to be exploited by the Allies. The unbelievable difference in strength when he Americans joined was just unfair! It was unlikely the Germans would win before the Americans joined but after it was just unbelievably unfair as the difference in resources and manpower was incredible. When the Americans joined, it added to the huge economic might of the Allies. This caused the spring offensive to fail and thus the Germans became even weaker. This disheartened them and when their morale e started to fall, it was clear that their ability to fight would fall. The integration of new technologies on the Allied side inflicted heavy losses for the Germans and this caused their morale to drop further. Thus I can finally conclude that after consideration of these factors Germany would have been able to deal with any of these factors but when they had to face them all, they could not cope and had to surrender. Chris Charles 5H2 History Coursework ...read more.