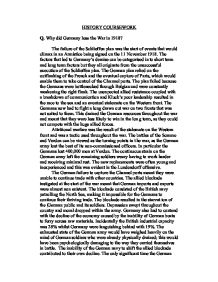 HISTORY COURSEWORK Q. Why did Germany lose the War in 1918? The failure of the Schlieffen plan was the start of events that would climax in an Armistice being signed on the 11 November 1918. The factors that led to Germany's demise can be categorised into short term and long term factors but they all originate from the unsuccessful execution of the Schlieffen plan. The German plan relied on the outflanking of the French and the eventual capture of Paris, which would enable them to take control of the Channel ports. The plan failed because the Germans were bottlenecked through Belgian and were constantly weakening the right flank. The unexpected allied resistance coupled with a breakdown of communication and Kluck's poor leadership resulted in the race to the sea and an eventual stalemate on the Western front. The Germans now had to fight a long drawn out war on two fronts that was not suited to them. This drained the German resources throughout the war and meant that they were less likely to win in the long term, as they could not compete with the huge allied forces. ...read more.

Incidentally the British industrial capacity was 28% whilst Germany were languishing behind with 19%. The exhausted state of the German army would have weighed heavily on the mind of German soldiers who were already physically drained; this would have been psychologically damaging to the way they carried themselves in battle. The inability of the German navy to shift the allied blockade contributed to their own decline. The only significant time the German fleet was used was in the Battle of Jutland in which they failed to win, thus handing the British navy domination of the seas. As the situation worsened the Germans needed a tactic that would ensure a decisive victory. The unrestricted submarine warfare employed by Germany eventually resulted in the sinking of a passenger ship, the Lustitania. This was followed by the Zimmerman telegram that resulted in an American declaration of War against the Central Powers. The intervention of the American is interpreted as a pivotal moment in the First World War. Although the Americans had no significant effect on the war as regards to soldiers they gave the Allied forces a huge boost in morale, as they were one of the richest countries in the world. ...read more.

This was because substantial land gains could now be made. For instance artillery became more accurate meaning that barbwire could easily be cut, making the route towards the dugout l less complicated. The improved artillery also allowed creeping barrages and artillery ambushes. The invention of the tank that was first seen at the Somme proved catastrophic as many broke down. Later advance meant they were more effective at Cambrai but the allies were unable to provide backup. In 1918 the use of the tank had been perfected with its tandem role with close infantry support. New positive strategies were adopted allowing battles to be completed quickly. This was due to ideas such as storm trooper that would be sent in to exploit success and fill in the gaps. The allied forces effectively used the new tactics and were backed up with defence in depth. The capitulation of Germanys allies meant they were continually spreading their men to provide assistance. Bulgaria and Italy were unable to support Germany in the way France an England worked off each others successes. The disgust of the German public was evident and revolution followed. Without the support of the public Kaiser Wilhelm was forced to negotiate an armistice with the Allies. ...read more.