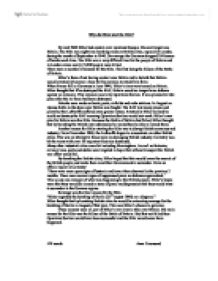 Why did Hitler start the Blitz?

Why did Hitler start the Blitz? By mid 1940 Hitler had control over mainland Europe. His next target was Britain. The Blitz was night time bombing raids on British cities, especially London, during the month of September in 1940. On average the Germans dropped 250 tonnes of bombs each time. The Blitz was a very difficult time for the people of Britain and in London alone nearly 13,000 people were killed. There were a number of reasons for the Blitz. The first being the failure of the Battle of Britain. Hitler's fears of not having control over Britain led to beliefs that Britain would eventually become a base for his enemies to attack him from. ...read more.

The RAF lost many planes and pilots but the Luftwaffe suffered even greater losses. Eventually Hitler realised he could not destroy the RAF meaning Operation Sealion would not work. Hitler's new plan for Britain was the Blitz. Because the Battle of Britain had failed, Hitler thought that by bombing the British into submission he would then be able to invade them. Another reason for Hitler starting the Blitz was to disrupt British economy and industry. From November 1940, the Luftwaffe began to concentrate on other British cities. This was an attempt to focus more on damaging British industry. Coventry was hit the worst with over 20 important factories destroyed. ...read more.

This is just one example of what was happening to the British people. Hitler's hopes were that they would be in such a state of panic and depression that they would want to surrender to the German regime. Revenge was the final reason for the Blitz. "Hitler regarded the bombing of Berlin (25th august 1940) as a disgrace." Hitler thought that by bombing British cities he would be extracting revenge for the bombing of Berlin in August of that year. This was Hitler's chance to get even. These reasons were all part of Hitler's war aims to take over Britain. His main reason for the Blitz was the failure of the Battle of Britain. Had this not failed then Operation Sealion would have been successful and the Blitz would never have happened. 510 words Anna Townsend ...read more.