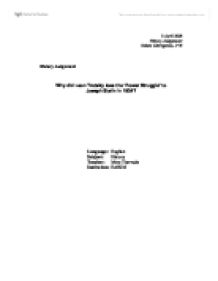 Why did Leon Trotsky lose the 'Power Struggle' to Joseph Stalin in 1924?

2-April-2003 History Assignment Roham Gharegozlou, 1oIB History Assignment Why did Leon Trotsky lose the 'Power Struggle' to Joseph Stalin in 1924? Language: English Subject: History Teacher: Mme Therrode Institution: EABJM One of the most controversial and notable politicians of his time, Trotsky was at one point the 'second in command' in Bolshevik Russia, right after Lenin. Respected and supported by the latter, who himself was regarded as the unquestioned Bolshevik leader, Trotsky enjoyed a very large influence within the Communist Party of the time, both due to his ties with Lenin and his great contribution to the October revolution in Russia. Thus it was that in 1924, after Lenin's death, Trotsky seemed to most, and to himself certainly, to be the logical successor. Why is it then that Stalin, someone whom Trotsky did not even think of as competition, completely decimated Trotsky politically and caused his complete downfall in communist ranks? ...read more.

His post as General Secretary allowed him to keep such close contact with the Party members, whereas Trotsky's post necessitated his constant traveling and thus eloignment from the Party members. This impression of aloofness was not helped by the fact that, through Stalin's plans, Trotsky was not informed in time of Lenin's death and was thus not present at his funeral: a very bad image for the potential successor to have. A third, and perhaps peripheral, but nevertheless important aspect was Trotsky's sickness at the time: he had contracted malaria recently at a 'duck-hunting expedition'. In Source H we can see that, according to his wife, his sickness coupled with his situation put an extremely heavy weight on his shoulders, and Trotsky himself "ruefully noted that his illness could hardly have come at a worse time", meaning that it must have had quite an impact on his performance against his opposition, definitely not good for his position in the Party at such an important stage. ...read more.

This made Trotsky the favorite for the power struggle, leading two other candidates (albeit much smaller ones), Kamenev and Zinoviev, to side initially with Stalin, hoping to reduce Trotsky's strength, thereby improving their own position. This reinforced Stalin in his legitimacy, and by the time the two switched over to the Trotsky 'camp', Stalin was already too strong and shortly afterwards, Trotsky was expelled from the party. It is due to all aforementioned reasons that Stalin was able to secure a much stronger foothold than his rival, and ultimately oust him from the 'match': gradually, through various means of political slander and defamation, Trotsky, as well as Kamenev and Zinoviev, lost support in the party and were marginalized, with Trotsky of course being sent out of the country. Thus it was that the rise of Stalinism came about in the globe, and set off a controversial, savage, and brutally efficient regime that was going to shape the world's current affaires for decades to come. Trotsky's Failure to win the Power Struggle 2-April-2003 Roham Gharegozlou, 1oIB Page 2/4 ...read more.