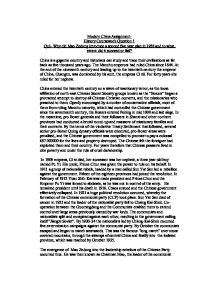 Why did Mao Zedong introduce a second five year plan in 1958 and to what extent did it succeed or fail?

Modern China Assignment- History Coursework Question 1 Qu1- Why did Mao Zedong introduce a second five year plan in 1958 and to what extent did it succeed or fail? China is a gigantic country and historians can study and trace their civilisations as far back as five thousand years ago. The Manchu emperors had ruled China since 1644. At the end of the nineteenth century and leading up to the twentieth century the emperor of China, Guangxu, was dominated by his aunt, the empress Ci xii. For forty years she ruled for her nephew. China entered the twentieth century on a wave of reactionary terror, as the loose affiliation of north-east Chinese Secret Society groups known as the "Boxers" began a protracted attempt to destroy all Chinese Christian converts, and the missionaries who preached to them. Openly encouraged by a number of conservative officials, most of them from ruling Manchu minority, which had controlled the Chinese government since the seventeenth century, the Boxers entered Peking in mid 1900 and laid siege. In the meantime, pro Boxer generals and their followers in Shanxi and other northern provinces had conducted a brutal round-up and massacre of missionary families and their converts. By the terms of the vindictive Treaty Settlement that followed, several senior pro-Boxer Quing dynasty officials were executed, pro-Boxer areas were penalised, and the Chinese government was compelled to promise to pay a colossal �67 000000 for the lives and property destroyed. The Chinese felt the foreigner had exploited them and their country. For years therefore that Chinese peasants lived in dire poverty and under the rule of cruel dictatorship. In 1908 empress, Ci xi died, her successor was her nephew, a three year old boy named Pu Yi. His uncle, Prince Chun was given the power to rule on his behalf. In 1911 a group of nationalist rebels, headed by a man called Sun Yat Sen led a rebellion against the government. ...read more.

More aspects affected Mao's decision, for example in 1950 the USA sent troops to South Korea against Chinese backed North Koreans. In 1953 the USA conspired to block China's application to the United Nations. The USA and China obviously had a bad relationship with one another. To begin with the China and the Soviet Union seemed natural allies against the Western powers as they were both communists. Since the early days of the Chinese communist Party the Soviet Union had given Chinese communities advice and assistance. As an extension of their good relationship, in February of 1950 Mao signed The Treaty Of Friendship with the USSR: an agreement based on respect for the principle of equality, state independence and national sovereignty. He signed this because China would have credits and advisers. For a while relations with the Russia and China were stable, however when we entered the mid 1950's their relationship gradually deteriorated and was not as successful as everyone thought. Their relationship gradually deteriorated for many reasons; in Mao's view, the Soviet Union should not dominate Chinese revolution and as he put it once himself: " If the Russians break wind, we don't have to pretend it smells nice". The soviet view was that he was a nationalist. As one soviet member put it: "he was bursting with an impatient desire to rule the world. His plan was to rule first China, then Asia, then ...what?" The USSR began to argue about atomic weapons. They then began to have border disputes with India. The Soviet Union sent two helicopters, dozens of tanks and armoured vehicles, and several hundred armed troops to intrude into the border area. They penetrated a depth of two kilometres, unwarrantedly fired at the Chinese frontier wards on normal patrol duty, killing and wounding many of them on the spot, and closed on them. Driven beyond the limits of forbearance, the Chinese frontier guards were compelled to fight back in self-defence. ...read more.

A select group discussed with Deng the possible changes to china, often these were based on more developed countries like America, ideas were then published in papers or on television for discussion. Mao would never have tolerated this, he deemed the people not worthy of this knowledge. In the media under Mao everything was strictly controlled. Under Deng however, the introduction of televisions meant the people were more aware of news and affairs abroad. China became part of the modern world, as westerners knew it. Pop concerts, dancers and other western entertainment became more popular, there were more bikes, cars and motorbikes and there was more time for recreational activities. The people were more relaxed and the standard of living greatly improved. This would certainly not have been allowed in Mao's time. In tourism, Mao had no idea how to treat foreigners and never allowed. Deng realised that tourism would bring big business and outside influences this would help China to become more modern. In conclusion there have been so many changes that virtually none of Maoist china exists today. The economy was revamped and made more modern, there was a greater capacity to become wealthy and afford new things. People were given more responsibility in the workplace and were free to make their own decisions. The younger generations were helped to educate themselves and given a free choice as to what they wanted to do with their lives. Peoples social life was improved, they had more time and they were happier. Because of the change in the economy they had more money to spend. Politically China had changed, communism was still there but the beliefs had lessened a bit to allow people to be able to live in the world comfortably, however the main points are still in focus. The people's army is still running as it was in Mao's day but it is now much less of a force. China Still had a long way to go to become a democracy. These changes maybe a long time coming but at least they escaped Mao's restrictive control. ...read more.