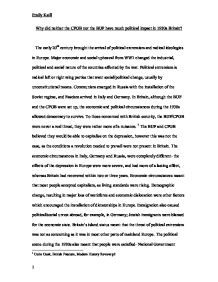 Why did neither the CPGB nor the BUF have much political impact in 1930s Britain? The early 20th century brought the arrival of political extremism and radical ideologies in Europe. Major economic and social upheaval from WW1 changed the industrial, political and social nature of the countries affected by the war. Political extremism is radical left or right wing parties that want social/political change, usually by unconstitutional means. Communism emerged in Russia with the installation of the Soviet regime, and Fascism arrived in Italy and Germany. In Britain, although the BUF and the CPGB were set up, the economic and political circumstances during the 1930s allowed democracy to survive. To those concerned with British security, the BUF/CPGB were never a real threat, they were rather more of a nuisance. 1 The BUF and CPGB believed they would be able to capitalise on the depression, however this was not the case, as the conditions a revolution needed to prevail were not present in Britain. The economic circumstances in Italy, Germany and Russia, were completely different- the effects of the depression in Europe were more severe, and had more of a lasting effect, whereas Britain had recovered within two or three years. Economic circumstances meant that most people accepted capitalism, as living standards were rising. Demographic change, resulting in major loss of workforce and economic dislocation were other factors which encouraged the installation of dictatorships in Europe. Immigration also caused political/social unrest abroad, for example, in Germany; Jewish immigrants were blamed for the economic state. Britain's island status meant that the threat of political extremism was not as concerning as it was in most other parts of mainland Europe. ...read more.

As the brutality of the Soviet regime was revealed, i.e. 'show trials'- involving public executions of Stalin's enemies-, which were endorsed by the CPGB (the Daily Worker's headline read- "Shoot the reptiles".11) Labour did not want to be seen by voters as having any contact with this, and wanted to keep its earned image of respectability-connections with this would have greatly lowered their support. Labour was also extremely suspicious of the CPGB and believed that their desire to affiliate was in order to bring the party down and achieve global communist control. Labour worked to marginalize the CPGB, and by using popular and moderate policies such as gradualism, left-wing supporters still remained loyal to them. Again, the economic situation was satisfactory, so for the majority, there was no need to turn to communism. Dominated by Conservatives, the National Government denied the BUF space on the political right. The National Government was extremely popular, and was perhaps able to capitalize on Labour's 1931 crisis. The National Government was one of the only British governments that were supported by more than 50% of the electorate.12 Their success was mainly due to the range of people which it drew votes from- they were a coalition of elements from all major democratic parties, and so appealed to almost all sections of society. Therefore, they faced no serious opposition, and again, as Labour did, were able to effectively contain political extremism. Stability and reassurance were offered by the National Government, as they were seen as a safe-option both politically and socially, at a time when communism and the end of capitalism were feared. ...read more.