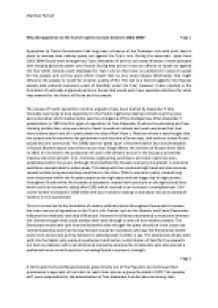 Why did opposition to the Tsarist regime increase between 1881-1904?

﻿Matthew Parnell Why did opposition to the Tsarist regime increase between 1881-1904? Page 1 Opposition to Tsarist Government had long been a feature of the Romanov rule with strict laws in place to oversee that nobody spoke out against the Tsar?s rule. During the autocratic years from 1881-1904 Russia went through two Tsars, Alexander III and his successor Nicholas II both obsessed with keeping absolute power over Russia. During that period it was an offence to speak out against the Tsar whilst nobody could challenge the Tsar?s rule as there was no parliament in place to speak for the people and no free press which meant that no one could release information that might influence the people to revolt for a better quality of life. This led to a hard struggle for the Russian people who endured numerous years of hardship under the Tsar; however it also resulted in the formation of politically organised parties in Russia that would each have separate ambitions for what they wanted for the future of Russia and her people. The causes of Tsarist opposition could be argued to have been started by Alexander II who ironically was trying to stop opposition to the Tsarist regime by relaxing controls over the press and universities which inadvertently saw the emergence of the intelligentsia. ...read more.

The Democrats would later split into the Bolsheviks who thought the party should be ruled under one central leadership and that the way forward would be revolution whereas the Mensheviks beliefs were more democratic as they believed in allowing each member a say. The Liberals would also later split into the Kadets who wanted a parliament and better re-distribution of land for the peasants but had no problems with a constitutional monarchy whereas the Octoberists who also wanted a parliament were more focused on increasing Russia?s economic strength. Page 2 A third party the Social Revolutionaries grew directly out of the Populists and continued their predecessor?s approach of terrorism to reach their aims as a group founded in 1879 ?the peoples will? were responsible for the assassination of Tsar Alexander II whilst also continuing their extremist views into the early 1900?s between 1901 and 1905, were it was the terrorist faction of the Revolutionaries that dominated with over 2000 assassinations, including Plehve, the interior minister, and the Tsar?s uncle, Duke Sergei. Eventually this unrest along with several assassination attempts from the Revolutionaries resulted in Alexander III abdicating in 1894 leaving his young and shy son Nicholas II as supreme ruler of Russia. ...read more.

Hundreds of people died on the day that is now known as b****y Sunday. This led to a national outbreak of disorder with strikes and riots in major cities whilst even minor mutiny in the Army and Navy who were ashamed of the defeat in the war, the Tsar was at war with his own people the revolution had begun. There were many factors of why opposition increased between 1881 and 1904 however the main reason was the introduction of western ideas to what had previously been a nation in isolationism with the prevention of free press. The ideas (Marxism) that had seeped in to Russia made the public question why they couldn?t have a say in how their country was run which led to the development and rise in organised political parties which became the main opposition to the Tsarist regime as both Tsar?s struggled to cope with what the people wanted. Ultimately the sheer size of Russia and its massive population made it impossible to govern and whilst Russia struggled to get out of its backward status the public?s welfare was compromised as both Tsars main priority was to increase Russia economically. This led to an inevitable uprising. (1245 words) ...read more.