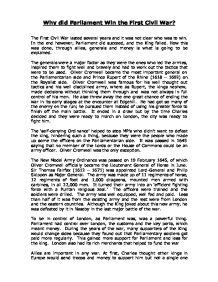 Why did Parliament win the first civil war?

Why did Parliament Win the First Civil War? The First Civil War lasted several years and it was not clear who was to win. In the end however, Parliament did succeed, and the King failed. How this was done, through allies, generals and money is what is going to be explained. The generals were a major factor as they were the ones who led the armies, inspired them to fight well and bravely and had to work out the tactics that were to be used. Oliver Cromwell became the most important general on the Parliamentarian side and Prince Rupert of the Rhine (1618 - 1692) on the Royalist side. Oliver Cromwell was famous for his well thought out tactics and his well disciplined army, where as Rupert, the kings nephew, made decisions without thinking them through and was not always in full control of his men. ...read more.

Sir Thomas Fairfax (1612 - 1671) was appointed Lord-General and Philip Skippon as Major General. The army was made up of 11 regiments of horse, 12 regiments of foot and 1,000 dragoons, mounted men armed with carbines, in all 22,000 men. It turned their army into an 'efficient fighting force with a Puritan religious zeal.' The officers were trained and the soldiers were drilled. The army was well equipped, well fed and paid. Less than half of it was from the existing army and the rest were from London and the eastern countries. Although the King joked about this new army, he was defeated by it in Naseby in the last major battle of the war. To be in control of London, as Parliament was, was a powerful thing. Parliament had control over London, the customs and the key ports, which meant money. ...read more.

By the time the Scots decided to change sides, the New Model Army was fighting well. Wars cost money. Charles had many very wealthy supporters and could have funded a short war very easily. But there was no quick victory for him and his supporters so money was becoming a concern. As well as having the advantage of controlling London, the Parliamentarians were also much more efficient that the Royalists at collecting taxes from the areas they controlled. The King could not afford to raise another army after many of his men were killed at Naseby in 1645 It was not only that Parliament won the First Civil war, but that the Royalists lost. It was not that Parliament had more support than the king, because they didn't and it was not that Parliament had always been stronger because they hadn't. The king didn't take his chance early on, and the Parliamentarian side grew stronger and had good leaders, along with the fact that they had the advantage of support and control over London. ...read more.