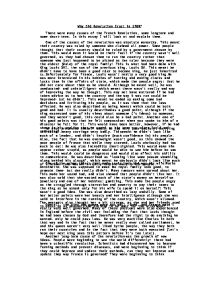 Why Did Revolution Erupt in 1789? There were many causes of the French Revolution

Why Did Revolution Erupt in 1789? There were many causes of the French Revolution, some long-term and some short-term. In this essay I will look at and explain them. One of the causes of the revolution was absolute monarchy. This meant their country was ruled by someone who claimed all power. Some people thought that their country should be ruled by a government chosen by them. This would mean it would be their fault if the country wasn't well governed, as they had chosen them to run the country- rather than someone who just happened to be picked as the ruler because they were the eldest (male) of the royal family! This is what had been done with King Louis XVI, the son of the previous king, Louis XV. This meant he didn't have to have been a good ruler to become king, he just inherited it. Unfortunately for France, Louis wasn't really a very good king. He was more interested in his hobbies of hunting and making clocks and locks than in the affairs of state, which made the people angry: that he did not care about them as he should. Although he meant well, he was uneducated- and unintelligent- which meant there wasn't really and way of improving the way he thought. This may not have mattered if he had taken advice as to how the country and the way it was run could be improved- but he didn't. ...read more.

As industry grew, more money was made, and many members of the Third Estate became fairly wealthy as they became merchants, bankers, ship owners, shopkeepers and workshop masters. When they had more money, they became more independent- getting better education, smarter- they began having lifestyles as good as some nobles- some better. They wanted a greater say in the running of the country- they were beginning to criticize the way the country was run, spotting faults and wanting them corrected. They wanted to be listened to- to be respected. They wanted to be respected like the nobles who passed them in their carriages. They were respected just as much as the urban workers and landless labourers- and they wanted more. After all, it was them who had had to make something of themselves- they weren't just born into riches! They were the ones on the receiving end of all the taxes and unfair treatment- it was them who knew how the country needed to be improved, and still no one respected or listened to them. They were getting irritated. The burden of feudal dues was also growing. This meant the poor peasants, who were already crushed by the taxes they were paying, now had to pay even more tax to their lords. This was because the country was bankrupt, and needed more money to pay off its debt. ...read more.

Because there wasn't so much wheat and it was more expensive, this meant there wasn't very much bread and it was being wanted by more and more people, as the population of France was increasing. With more people wanting it and less bread available, the price of bread rose drastically. Of course, with their taxes and the cost of living rising, it meant most peasants could no longer afford to buy bread, and poverty and starvation was on the increase! The people, worried Louis might try to regain power using troops, forced him from his palace in Versailles to come back to Paris with them, along with his family. Louis would now be surrounded by normal people rather than nobles. Another cause linked in to the starvation/bread shortage was the crisis in industry, which had had thousands of people thrown out of work. This meant they were no longer being paid, which meant they hardly had enough money to feed themselves, and with both the taxes and the cost of bread on the rise, poverty was increasing and so was starvation. Soon the peasants were revolting throughout most of France, burning castles and burning feudal documents. They also refused to pay taxes unless they were killed first, and that they would fight for their rights. Overall just about everyone in France was unhappy for some reason and their problems were just growing. If they didn't do something about them soon then they might never get them sorted out! They had to do something... ...read more.