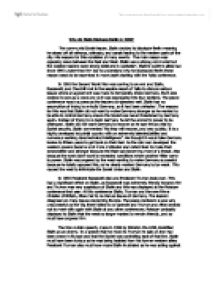 Why did Stalin Blockade Berlin in 1948?

Why did Stalin Blockade Berlin in 1948? The communist Soviet leader, Stalin decided to blockade Berlin meaning he closed off all railways, railroads, and canals leading to the western parts of the city. His reasons for this consisted of many events. The main reason was opposing views between the East and West. Stalin was a strong communist but the western leaders were strong believers in capitalism. Stalin's wartime allies had since 1945 undermined him but to understand why he blockaded Berlin these reason needs to be examined in more depth starting with the Yalta conference. In 1945 the Second World War was coming to an end and Stalin, Roosevelt, and Churchill met in the seaside resort of Yalta to discuss various issues where an agreement was made to temporally divide Germany. Each side decided to occupy a zone and so it was segregated into four sections. The peace conference was a success as the leaders co-operated well. ...read more.

Stalin was angered by the west wanting to make Germany successful because he totally opposed this, as he clearly wanted Germany to be weak. This caused the west to intimidate the Soviet Union and Stalin. In 1945 President Roosevelt died and President Truman took over. This had a significant effect on Stalin, as Roosevelt was extremely friendly towards him and Truman was very suspicious of Stalin and this was displayed at the Potsdam conference that year. At this conference Stalin, Truman and the new Prime minister of Britain, Atlee met to re discuss issues of Germany. The leaders disagreed on many issues concerning Europe. The peace conference was very unsuccessful as the `big three' failed to co-operate and Truman and Atlee decided not to meet with again with Stalin at any other conferences. Potsdam probably displayed to Stalin that the west no longer wanted to remain friendly, and so must have angered him. ...read more.

The last action that drove Stalin to Blockade Berlin was when the west introduced the new currency, called the Deutschmark. This angered him because it was extremely successful and demonstrated that Germany was becoming increasingly stronger which Stalin didn't want from the start. Stalin didn't want this because he feared another attack from Germany. Stalin decided to blockade Berlin in 1948 for a number of reasons. The most blatant reason was that Stalin had completely opposing views to the western leaders which was why they could not co-operate. Also the western leaders continued to undermine Stalin from the Potsdam conference to the Truman Doctrine. All the west's actions led Stalin to feel frustrated and isolated. The west's actions also made Stalin feel threatened, as he knew that the western part of Germany was becoming strong and so he feared that the Soviet Union would be invaded again. So to keep Germany weak he saw no other option than to Blockade Berlin in 1948. ...read more.