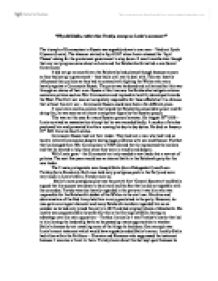 &quot;Why did Stalin, rather than Trotsky, emerge as Lenin's successor?&quot;

"Why did Stalin, rather than Trotsky, emerge as Lenin's successor?" The triumph of Communism in Russia was arguably down to one man - Vladimir Ilyich Ulyanov (Lenin). The takeover started in April1917 when Lenin released the 'April Theses' asking for the provisional government to step down. It was 6 months later though that any real progress came about as Lenin and the Bolsheviks formatted a new Soviet Government. It did not go as smoothly as the Bolsheviks had planned though because as soon as they had set up a government - they had a civil war to deal with. This war heavily influenced their policies as they had to contend with fighting the Whites who were heavily against a Communist Russia. The party was hardened and militarized but this was through no choice of their own. Russia at this time saw the Bolsheviks instigate extreme economic policies such as War Communism and implacable hostility developed towards the West. ...read more.

Trotsky was also heavily regarded in the party as it was him who was responsible for the Bolshevik's defeat of the Whites in the civil war. His drive and determination of the Red Army held him in very good stead in the party. However, he was quite an arrogant character and many Bolshevik members regarded him as an outsider as he had only joined the party in 1917 and had originally been a Menshevik. His loyalty was unquestionable however but this is the first sign of Stalin having an advantage over his main opposition - Trotsky. Ironically it was Trotsky's loyalty that led to him loosing the leadership battle as he passed up many opportunities to weaken Stalin's chances by not revealing some of the things he had done. One example was Lenin's secret testament which would have arguably ended Stalin's career. Luckily Stalin had allies within the Politburo - Zinoviev and Kamenev who suppressed the testament because it was also a threat to them. ...read more.

He was missing at Lenin's funeral but he remarked that he had been told the wrong date by Stalin. This may well have been true but this put Trotsky immediately down in the popularity contest as Lenin was extremely well respected and this lack of respect from Trotsky did not bode well. Stalin's 2 right hand men - Zinoviev and Kamenev continued to campaign against Trotsky but Trotsky was renowned for his orating skills and he did not give in. He rebuked the both of them by asking of their loyalty to Lenin after they had raised opposition against him in 1917. All the while - Stalin was gradually building up his support within the Politburo and replacing the old voters with his allies. However - Stalin's 2 right hand men became enemies when they called for a vote of no confidence in 1925. This resulted in Stalin expelling all three - Zinoviev, Kamenev and Trotsky from their positions. From here - Stalin expelled all other members and became the new leader of the USSR. ...read more.